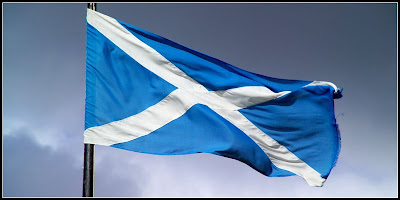 This isn’t a particularly big day in Scotland, but then St. David’s Day and St. George’s Day aren’t either. Which probably seems out to the Americans reading this, when you consider how important both Thanksgiving and the 4th of July are.

There’s much I love about Scotland, my adopted homeland since 2001. I didn’t just move here because I loved Belle and Sebastian or because of Fopp and Avalanche, though these were factors in my coming. Since moving here, I’ve interviewed Emma Pollock, had tea at Stevie Jackson from Belle and Sebastian’s house, worked with members of the Prats, X-Vectors and Wounded Knee, to say nothing of seeing many acts. Oh, and started my own indie label, done my own club night, begun this blog…and qualified as a teacher. It’s a place where many of my dreams have come true.

It’s not just about the music. There’s great literature, great films and a whole thriving culture. I don;t think I could live anywhere else. Sure the winter’s are severe, but you can’t have everything.

And an mp3 from the album, ‘American Trilogy.’

Oh go on! Here’s the video too…

And some other great, classic scottish tracks…

Yes, I know most of them are over twenty years old, but hey…