The Au Pairs were part of the late seventies and early eighties post-punk scene that has come to be known as…well, post-punk, though I get the feeling it wasn’t really called so at the time. The band consisted of guitarist Paul Foad, guitarist and vocalist Lesley Woods, bassist Jane Munro and drummer Pete Hammond. Woods was one of the few ‘out’ lesbians in the music industry at the time, even within the left-wing politics of much of the music scene of the time, and the band were considered important on the riot grrl (sic) movement of the 1990s.

There are probably many better people out there to write critiques of the politics involved, but the music is what i want to focus on. If you have heard Gang of Four and Delta 5 (both of whom I have featured here before) then they were in a similar vein but very much an influential group in their own right.

This is there second single, from 1980 ‘Diet’/’It’s Obvious.’ I should warn people that the sound is a little crackly (and not available on emusic or iTunes, at least in the UK, I did try). But it’s a great record that should be heard, as should the debut Playing With A Different Sex. ‘Diet’ is a sympathetic but frustrated look at the life of a housewife, who doesn’t have political views and spends her time cleaning and washing.

There is a good Au Pairs site here and their Wikipedia entry is here as well as an article here at Fact magazine. 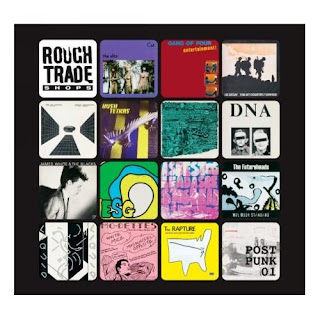 The legendary Rough Trade Shops in London have also put out some amazing compilations over the last few years. In 2003, this was one of them. The album was a mixture of acts from the ‘first’ wave of ‘Post-Punk’, such as Public Image Limited, Essential Logic and Magazine, as well as acts from more recent times, whose sound owes a lot to post-punk, such as Chicks On Speed, The Futureheads and The Rapture.

It’s disc #1 I’d like to present some choice cuts from today.

First up, Ari Up from The Slits features on the New Age Steppers version of the Junior Byles reggae classic.

Kleenex hailed from Switzerland, but legal action from the tissue makers forced them to change their name to Liliput. This trak shows just how cool whistling is.

Chicks On Speed later covered this number from Leeds’ Delta 5. a song that makes you sit up straight, apologise for mumbling and stutter apologetically (wonder of I can find a way to teach some of my students to do this?)

Delta 5-‘Mind Your Own Business.’ mp3

I don’t know how many other songs have been written about the police harassment of prostitutes (there is a comments box if you know about them, and no, ‘She Works Hard For The Money’ does not count). The Au Pairs are one of mnay of the first wave of post-punk bands I wish I had seen (mind you, given that I was only four when this came out. Ah well…)