I have made some odd decisions in life -but something I am very glad I did was to move to Scotland, ten years ago this August.

Robert Burns was Scotland’s national poet, and very much a hero still. he’s probably best known for writing ‘Auld Lang Syne’ but he also wrote many other fine numbers, including ‘My Love Is Like A Red Red Rose’ ‘A Man’s A Man For A’ That’ and the epic ‘Tam O’Shanter.’

So as today is January 25 -Burns Night in Scotland and in Scottish communities across the world – I give you four of Burns’ best known songs, done by Scots artists.

Delgados -‘A Parcel Of Rogues.’ mp3

One thing i would love to post here -but have no knowledge of any footage in audio or video form is of Belle and Sebastian performing in Sweden singing ‘Auld Lang Syne’. In Swedish. As you do… 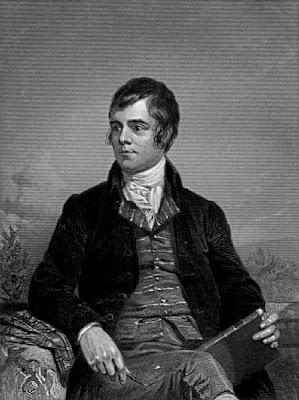 Today is Burns’ Night in Scotland, in honour of Robert Burns (1759-1796), scotland’s National Bard. No other literary figure – not even Shakespeare- can really be eclebrated as he is. The man was a legend, and his inspiration runs through to this day, inspiring many. Maya Angelou (I Know Why The Cage Bird Sings) discovered Burns when she was eight and said ‘He was the first white man I read who seemed to understand that a human being was a human being and that we are more alike than unalike.’ At the Burns and a’ that Festival in 2003, Patti Smith performed a rendition of ‘Afton Water.’ Kofi Annan gave the inaugural Robert Burns Memorial lecture in New York, using Burns’ ‘A Man’s a man for a’that’ as the touchstone for his remarks. Written in 1795 and covered by Ballboy (see below), this ‘anthem of radicalism’ was described by his later biographer Auguste Angellier as a ‘Marseilliase of Equality’ and was chosen to open the new scottish parliament.

Ballboy -‘A Man’s a Man For a’That.’ mp3 (Available as a free mp3 from their website)

My all-time favourite scottish band The Delgados covered ‘Such a Pacel Of Rogues In A Nation’ for a Peel session a few years ago. The Parcel Of Rogues In A Nation refers to the English and England, and is Burns’ scathing attack on the Union Of Parliaments in 1707. Some see it as evidence of his nationalist tendendies, but others have suggested that he was just being provocative.

The Delgados -‘A Parcel Of Rogues.’ mp3 (available on their Peel sessions album)

Burns was a love machine par excellence, fathering nine children, not all of them with his wife Jean Armour. But she inspired ‘I Love My Jean’ set to music by Camera Obscura a few years ago, who also wrote music for ‘My Love Is Like A Red, Red Rose.’

Camera Obscura -‘A Red, red rose.’ mp3 (from the I Love My Jean single)

Other than that, amongst many others are Eddi Reader, who has released a n entire album of Burns’ songs and also, Belle and Sebastian have covered one of his best-known songs ‘Auld lang Syne’ in swedish (if anyone knows how to get hold of this please let me know).

There will be more scots, John Peel related music later. Watch this space.

Tomorrow is January 25 – a night for those of us in Scotland, and further afield to remember Robert Burns. Whilst I cannot claim to be an expert on the man, he is still held in high, high regard here in Scotland as the national bard. He is the man who originated ‘My Love Is Like A Red, Red Rose,’ ‘Ae Fond Kiss’ and perhaps most famously ‘Auld Lang Syne.’ In the last five years, Eddi Reader has released a whole album of his songs, and the songs have also been covered by The Delgados (‘Parcel of rogues’) and here, ballboy.
Ballboy -‘A man’s a man for a’ that.’ mp3
More ballboy mp3s can be found here
Buy Ballboy here