Having had a busy year to mark their thirtieth Anniversary, cool-as-anything Japanese three-piece Shonen Knife have toured this year in support of their excellent album Free Time…and now they give us another album, this time a tribute to their heroes The Ramones.

The Ramones often held a fascination for indie-pop acts (see Helen Love, pretty much anyone involved with the Edinburgh branch of the c86-scene -AGARR prefix on Avalanche Records stood for As Good As Ramones Records). Much of this was to do with the sheer energy and fun of their music. Most of the thirten tracks on display in their original form should be familiar to anyone who has ever heard The Ramones (I’m really hoping that’s most of you).

So What we get is their take on numbers like ‘Blitzkreig Bop’ (surely Exhibit A in ‘Debut singles should sound like a manifesto’ arguments), ‘Beat On The Brat’ and ‘Sheena Is A Punk Rocker,’ amongst others. On their UK tour this year the band played their encores as the Osaka Ramones -and in Edinburgh we got ‘Sheena’ ‘The KKK Took My Baby Away’ and ‘Blitzkreig…’ and excellent fun it was too. They are delivered in pretty much the same style throughout, without deviating drastically -and as the Ramones made an art-form of the ‘three chords good, four chords Jazz’ schtick, they don’t change much here.

Of course, The Ramones were very much a product of 1970s New York; ‘Chinese Rock’ is about scoring heroin. It’s not like Vanessa Paradis completely misinterpreting The Velvets’ ‘Waiting For The Man’ (about scoring heroin in Harlem ten years previously) but it seems a little strange on a song like this to be quite so cutesy, because it doesn’t come across as subversive. And the utter tragedy of ‘The KKK Took My Baby Away’ isn’t quite repeated in their reading. It is better than The Ordinary Boys’ version (quelle surprise), however.

No matter. Covers albums can be difficult things; one act doing an entire album of another’s songs could fall flat on its’ face.

This doesn’t. Ready for some fun? Gabba Gabba Hey…Let’s Go!’

Osaka Ramones- A Tribute To The Ramones is out now on Tomato Head/Damnably.

2011 marks Shonen Knife’s thirtieth anniversary. When they climb on stage and tear into their set, it’s with an impressive amount of energy for people of any age. Not only that but – as with their records – it’s just a performance full of sheer cheeky joy and pleasure. And they keep it up for the entire gig.

The last time they were here, they tell us, was eighteen or nineteen years ago, when they opened for Nirvana. As with other acts, they certainly benefited from Kurt Cobain’s patronage (see also The Vaselines, BMX Bandits, The Raincoats…)They then tear into ‘Perfect Freedom.’ This is the nopening track on their excellent, most recent album Free Time.

Tradition dictates that each Shonen Knife has a song about food, so tonight we get the ‘Sushi Bar Song’ as well Free Time‘s ‘PYO.’ This song was inspired by chance visit on trhe last trip to the UK when, between Brighton and London, they found a pick your own fruit farm.

It’s a hot sweaty night in Edinburgh and a tightly packed, sold out gig. But the sheer joy of watching them means any physical discomfort is soon put aside. This gig has so many highlights. Drummer Emi taking lead vocals on ‘I Am A Cat.’ ‘Supergroup’ being so good I buy the album from the merch stand next to me before the song is even finished. ‘Economic Crisis’ from the latest album and the song that made me fall for them in 1992 ‘Riding On The Rocket.’

They also have a side project as the Osaka Ramones so for the encore we get Ramones songs ‘ Sheena is a Punk Rocker.’ ‘The KKK took my baby away.’ And of course ‘Blitzkreig Bop.’

I waited nearly twenty years for this. And it was worth it!

This is, in fact, ver Knife’s fifteenth album. Having always admired what bits I got to hear (and I still play my 12″ single of ‘Riding On The Rocket’ nineteen years later), by the end of the opening track ‘Perfect Freedom’ I want to own the other fourteen…

Japanese three-piece Shonen Knife first formed in Osaka back in 1981. Despite numerous line-up changes over the years, they have gone on to gain numerous famous fans (Kurt Cobain and John Peel, to name but two) and mastered their own brand of Ramones-inspired indie punk pop brilliance. This album is a non-stop load of sheer energy.

The afore-mentioned ‘Perfect Freedom’ sets the tone brillaintly. There are two songs inspired by food -‘PYO’ was inspired after they visited a pick-your-own farm in Sussex, England; while ‘Rock’n’Roll Cake’ seems to be about just that. ‘Rolled Cake, I want to sleep in it…like hibernation.’ OK!

It is delightfully noisy and – in the best possible way – the aural equivalent of being fed too much tartrazine and sugar when only other people have to suffer the side effects.

I’m looking forward to their Edinburgh gig very much indeed…

Free time is out on July 11 on Damnably.

…a giant leap for indie-pop.

It is indeed forty years ago since Neil Armstrong walked on the moon.

How to mark that here? Posting ‘Space Oddity’ (which itself is forty years old now) by David Bowie with its’ sort of sequal ‘Ashes to Ashes’ as well?

‘I’m the Urban Spaceman’ by the Bondo Dog Doo-Dah band?

A great track, but someone’s probably thought of that too.

So…I give you one of Japan’s finest bands…Shonen Knife. 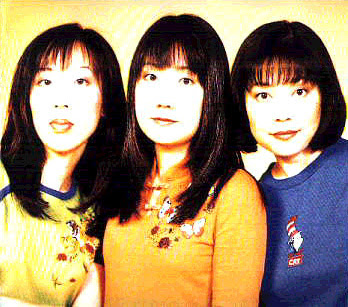 School holidays just cannot come soon enough. The kids are bouncing off the walls and dragging myself out of bed is getting harder. Nine days to go, not that I’m counting, or anything…

And a Fall song, not yet featured over at I Wish It Could Be Christmas Everyday (which is an excellent blog, btw, if you haven’t checked it out:)

It’s Sunday – and time for some more covers!

First up, these three came with a free CD with Q magazine last year. The Futureheads track was recorded exclusively for Q; the Camera Obscura and Placebo tracks had been available commercially. Try ebay or iTunes.

These next three tracks all appear on a compilation called ‘If I Were A Carpenter‘ whihc was a tribute album, not to Tim Hardin but to The Carpenters. These are my favourite three tracks off the album.

Bettie Serveert -‘For All We Know (Carpenters cover).’ mp3

This track appears on the Raincoats’ debut album, the sleevenotes for which were written by none other than Kurt Cobain. It also later turned up on the rather fine Rough Trade Shops Post-Punk 1 compilation. On the latter album, the sleevenotes (this time not by Kurt Cobain) note that one of the 100% endearing things about this version of The Kinks’ classic is that it sounds like it is about to fall apart any second.

Finally, this cover of Gerry Rafferty’s most famous song (though Stuck In The Middle With You probably is very close, thanks to its inclusion in Reservoir Dogs) was originally recorded for a compilation for EMI, and then turned up as one of the extra tracks on the ‘My Hero’ CD single.