Well, inbetween trying to plan lessons and getting on with education, I’ve managed to get back to the blog.

First of all, still no news on 120 days in the UK but the album is available through Insound here and they have also posted another track from the album, called ‘Get Away.’

If you didn’t pick it up before, one of the tracks of the year -surely is this 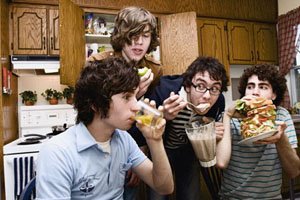 As well as Norway, there is clearly something stirring in Canada too. Tokyo Police Club make wonderful, short songs that recall fellow countrymen The Arcade Fire, but also Interpol and Death Cab For Cutie. Today they are Spin Magazine’s Band Of the Day and you should pay them a visit at myspace too. This doesn’t yet seem to have a UK release but Amazon seem to have a few import copies. Check this out:

Finally, The Klaxons are leading the new wave of new rave, or whatever silly label has been applied to it by NME (indie-rave? wasn’t that 1991? anyway…) Whilst it’s too easy to take pot shots at anyone who appears on it’s pages, I who didn’t particularly care for rave the ‘first’ time around (too busy belatedly discovering the Cure and morrissey) think they’ve got something. What think you?

The Klaxons -‘Atlantis to Interzone.’ mp3

No album – yet – but there are a few bits on Amazon