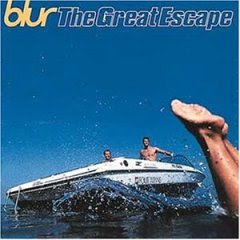 Blur‘s fourth album was released in 1995. The follow-up to their UK commercial breakthrough, it has become the most disputed album of the seven in their career. Much of that is due to an over-discussed battle with another band, which has overshadowed it. So, that’s all I’ll say about that part of the equation, and at most, just review it in on it’s own, or at least, as part of the Blur back catalogue.

The Great Escape is the third and final part of what is effectively a trilogy, the other two preceeding albums being, of course, Modern Life Is Rubbish and Parklife. Whilst Modern Life… had been conceived by a band who were seen as has-beens, the huge success of Parklife had made the band massive stars, now just as likely to be seen in teen magazines as in the music press. Given that there was just fifteen months between the third and fourth albums, maybe it seemed rushed. Granted there are a couple of tracks that might have been better as b-sides ‘Topman’ and ‘Dan Abnormal’, but then you can’t have it all.

There were four UK hit singles off the album, ‘Country House’ being the band’s first number one, and ‘The Universal, ‘Stereotypes’ and ‘Charmless man.’ Even to those who hadn’t heard the album, the knees-up ‘Country House’ was wildly different from the snarling ‘Stereotypes’ which might even have worked on the fifth album, while ‘Charmless Man’ showed that Pulp were not the only ones doing singalong social commentary. However ‘The Universal’ was utterly sublime, the sound of a band reaching for the stars.

There were also amazing album tracks, of which two ‘He Thought Of Cars’ and ‘Yuko and Hiro’ are included below. Blur might also have been the first band to work the word ‘Quango’ into a pop song as well.

And of course, the next album was a complete departure. Blur deserve to be seen as the British Band of the Nineties, and this album is just as much as part of that claim as any of the others.

Forget the historical over-analysis and enjoy for what they are. Presenting four cuts from Blur’s most under-rated album:

As always, these will be up for one week only.