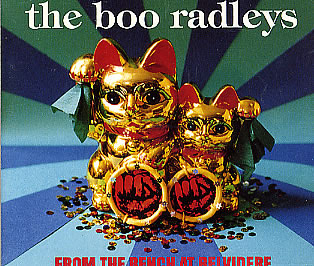 A possible new series at 17 Seconds.

Say what you like about Britpop-and it’s been analysed many times over the last deacde and nearly a half-but the bands understood the point of the single. Including-and this was perhaps a sign that they hadn’t all forgotten their ‘indie’ roots- the inbetween albums single. Not to be included on any album until the greatest hits/best-of album. Oasis first used lots of strings without getting syrupy on ‘Whatever’ in late 1994, when (What’s the Story?)Morning Glory was still nine months off release. Suede showed hints of epicness (but about the only hint of what their second album might be like with ‘Stay Together.’ Blur had been around for a little longer, and got theirs out of the way with ‘Popscene’ in early 1992 (and refused to put it on their greatest hits in 2000).

The Boo Radleys delivered a wonderful ballad called ‘From the Bench At Belvidere’ in Autumn 1995 (in the UK, anyway). It’s not poppy enough to belong on Wake Up! and not mad enough to have been on C’Mon Kids. It is still very, very lovely and almost forgotten about. But hey. Instead of a celebratory ‘School’s Out!’ (term finished for six and a half weeks today. Hooray), let’s have something beautiful. Oh, and one of the b-sides, obviously.

‘From The Bench At Belvidere’ is available on the recent ‘Best Of’ relased on Camden in the UK. Buy it here but try and see if your local independent record shop has it in first. These links will be up for one week only.