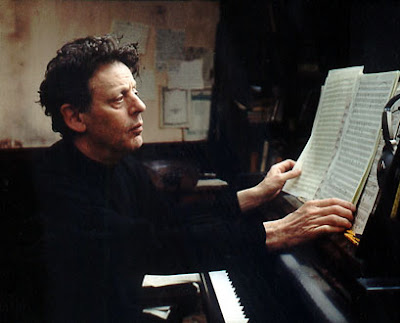 Tired, getting annoyed with people who cannot be quiet…ah, must be back at school again.

Actually, to be fair, I have been in a reasonably good mood most of the time, though there are some people I could name…Anyway.

I’d always intended to post some good classical stuff here, and in line with what this post has started off with, Philip Glass seems as good as any.

When I first heard Philip Glass, aged fourteen or fifteen, I was not impressed. At all. I felt our extremely pretentious music teacher was frankly mad for rating this over The Cure, or whatever. Einstein On A Beach, Glass’ opera didn’t make a favourable impression. A year or so later, and my interest was aroused twice in a fairly short time by things I was reading in the rock press. Firstly, Siouxsie Sioux, one of my all-time heroes, told the (now-defunct) music weekly Melody Maker about how much she liked Einstein On A Beach. Hmm, maybe something might be worth investigating about this man? And then, Glass recorded a symphonic version of my favourite ever David Bowie album, Low. Perhaps Bowie and Siouxsie were more clued-up than I was (this state of affairs probably still persists). When I heard Glass’ version of Low I actually enjoyed it.

A year or so later at university, one of my hosuemates and I sat down to watch the seminal film Koyaanisqatsi, for which Glass composed the soundtrack. In the Indian Hopi langauge this is a word translated variously as 1. Crazy Life 2. Life In Turmoil 3. Life Disintegrating 4. Life Out Of Balance 5. A State Of Life That Calls For Another Way Of Living.

(NB It says all this on the CD sleeve. Don’t get the idea that I speak Hopi or anything).

Anyway, Here I humbly present the bookending tracks of the six tracks on the OST:

Go buy the album. Check out the film. Narrow-minded folk..ya must’ve strayed here by mistake or something.