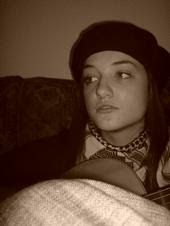 Back in May this year, I went along to see Emma Pollock at Cabaret Voltaire in Edinburgh. The support act that night was Katie Sutherland, who wowed us all from the moment she stepped on stage. Appearing as a solo singer-songwriter with a guitar as a support at gigs anywhere can be tricky: the apathy that support acts may encounter even if they are fully electrified can be made even worse for performers as they get drowned out by people talking. Yet, almost from the second she walked on stage, Katie Sutherland silenced us, drawing us in with her voice and songs.

Last Friday I saw her again, as support to Penny Century at Henry’s Cellar bar in Edinburgh. After another stunning solo set, I got the chance to talk to her and her manager John Gallagher about what they’ve been up to.

In the flesh, she’s a little shy, but very friendly and willing to elaborate on what she’s been up to. Manager John is down-to-earth to, and someone who’s clearly working very hard to get his charge to the top.

Katie was born and raised in Kirkintilloch, where she’s still based, though as she says ‘I’ve been in London quite a lot lately, doing some song writing.’ It was John who helped her to get her career launched by recording her four of her songs and stuck them on MySpace, which as she says ‘went down a treat.’ MySpace has clearly done a lot to help a lot of bands. Whilst not mentioning names, there are those who have made out that they are MySpace successes, but have done it all with the support of a major label. The same cannot be said of Katie, but support from a record label cannot be far away.

She’s clearly been writing a lot of fantastic songs -on Friday night’s gig she’s introduced three new ones into the set, including one that was just finished that day. I can’t resist asking her about ‘Mr. Lecturer,’ which she has been playing at gigs for a few months now, and which is my favourite song of hers. It still hasn’t been recorded, though she has been busy, networking in London and holidaying for two weeks in Mexico, and promises to let me know when it‘s done. She’s also due to play Connect festival the day after we speak, which seems to have gone down well too.

However, London may be where she ends up spending more of her time. For better or worse, it is still the hub of the music scene in the UK. She’s currently in discussion with people in London about both publishing and record deals. She won’t reveal who, though. ‘I probably shouldn’t tell you about that!’ she says, shyly. I wouldn’t want to tempt fate, I tell her, though if she hasn’t got a record deal in the bag by Christmas, then there is something very rotten going on.

As well as playing to record and publishing companies, She’s been collaborating with various people in London, including Marty beddenbrock who co-wrote with Paolo Nutini and Dido, and Paul Statham who has worked with Dido and Kylie Minogue. I ask her if she likes Dido, and she admits that she bought her two albums. John is clearly not a fan. I can’t resist asking if she’s throttled any record executives in London for comparing her to a certain ’brown-haired singer from Fife.’ She and manager John laugh at this -‘I’ll take that as a yes, then. ‘ We’ve got a wee chip going on there,‘ says John casually.

One of the problems that can be thrown up by record companies who have an attitude of ‘We Love You, You’re Perfect, (And We Just Want To Change Everything About You To Make US lots of money). Has she encountered people who want to mould her, and want to her compromise her sound?
’I thought it would be like that,’ she says, ’ but a lot of the record labels have been great. You’ve already written songs and they love it.’
John clarifies: ’ We’re quite clear [about what it is that they are going for in a record contract]. When we go to record companies we say that this is what we’re going for, what can you give us?’

Currently at gigs, Katie performs largely solo, with one or two occasional contributions from John and others. Is she is looking to assemble a live band to play with her?
‘Definitely but just now is ‘writing, writing, writing.’ Occasionally she plays live with other people like Blair ’a MySpace addition’ and John plays ‘when someone can’t fill in for a gig. In terms of live, that’s not what I want to be doing, ’ he explains.

Does she feel any pressure on her to relocate to London, even though there’s a fertile scene in Scotland? ‘It is tempting, actually,’ she says. She talks warmly about London, saying ‘ I really enjoy London, but I don’t know if I could live there. Glasgow’s great, she says, with obvious affection. ‘The music scene’s fantastic!’ Well, we knew that, but of course, she’s now part of it, and hopefully her profile will rise even higher.

So what of actually records of her own? There have been rumours of an EP, a version of which has been sold at gigs.
‘Oh man! The EP’s been delayed,’ she says. ‘But hopefully it will be out in the next couple of months.’

I wrap up the interview. She’s got two more gigs coming up that weekend, and more on later. The friends who were with me to see her supporting Emma Pollock had returned with me that evening. That’s a major vote of confidence in an -as yet-unsigned solo singer, but this state of affairs cannot remain that way for long. See her in small intimate surroundings while you get the chance.
And just for the record, she’s nothing at all like a certain brown-haired singer from Fife. OK?

Katie Sutherland’s MySpace is here. These two tracks of hers should be played to everyone who has ears.

Katie Sutherland -‘Because I Do.’ mp3