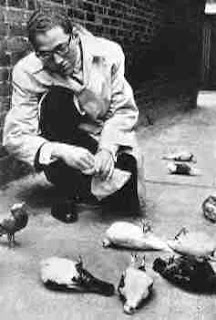 Tom Lehrer about to poison Pigeons in a Park (not really)

Well, it’s probably against aspects of many of them but only if you interpret it that way…

All credit to my wonderful parents that unlike many of those I went to school with (whether friends or not) that instead of subjecting their children to turgid rock or sickly stuff like Celine Dion, somehow the might of the mighty Tom Lehrer sunk his way into my subconscious at a very early age, and my brother’s at an even younger. What with my Mum dropping me on my head as a baby, growing up with Margaret Thatcher as Prime Minister and eating meat until I was fourteen…it’s amazing I’m still here.

Tom Lehrer sent up the American Establishment in a musical style not hugely dissimilar to Ben Folds jamming with Jello Biafra and with a humour that makes many punk bands seem frankly po-faced. Hell, the man could sing about incest (‘Oedipus Rex’), Vatican II (‘The Vatican Rag’) or Masochism (‘the masochism Tango’) and still be bloody funny.

Read about Tom Lehrer at Wikipedia.

Check out these mp3s, and see what you’ve been missing all these years.

first up, one to make you realise that you might know one of his songs

One of his most famous songs;

‘Fracture your spine and say you’ll be mine, as we dance to

And of course, in the fifties, nuclear war was the only way to go (actually, that might still be true)

Tom Lehrer -‘We Will All Go Together When We Go.’ mp3

If you like this, and have discovered that North Americans Do do irony after all, then go buy The Remains Of Tom Lehrer CD boxset.