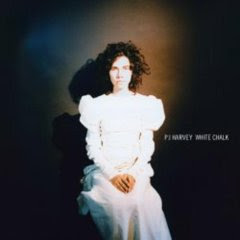 More than fifteen years into her career, each new PJ Harvey album is rightly greeted with interest and expectation. She intrigued us all from the moment she arrived -even as a fifteen year old male, there was something that seemed more feminist than titillation about ‘that’ naked picture in NME, and songs like ‘Sheela-Na-Gig’ (‘You EXHIBITIONIST!) and ‘Water’ showed someone whose music was intriguing, raw and honest, yet still unsettling. And then came the second album Rid Of Me.

Each of her albums genuinely stands alone and on it’s own merits. 1995’s To Bring You My Love took Beefheart’s mould and made her own, 2000’s Stories From the City, Stories From The Sea seemed almost commercial but distinctively her again.

And so here we have Polly Jean in 2007. Although produced with long-term collaborators Flood and John Parrish, this is yet again, a PJ Harvey record like none we have heard before. This is still striking music, but this time the rock, groove and electronics have all disappeared. This album has far more in common with early twentieth century classical music than anything she has done before. This time, the record is largely dominated by piano and her voice.

This record, at 34 minutes, is shorter than others she has produced, but there is something warm lurking underneath the initially stark audio. This will perhaps come as a shock to those most familiar with singles like ‘Good Fortune’ or ‘Down By The Water’ but this record continues the trajectory of a performer and songwriter who is much less bothered about pigeonholes, genres and categorisation than parts of her audience might be. There is a mystery and beauty about this record, and I think further, repeated listens will perhaps coax a few of its’ secrets out.

White Chalk is released on Monday September 24 in the UK on Universal Island.