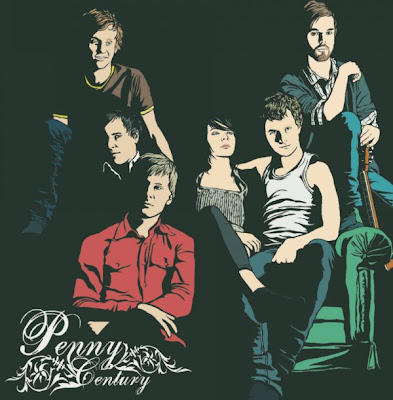 The best bands feel and look like a gang.

Think about it: Dexy’s Midnight Runners in their Mean Streets clobber. The Clash in that shot outside the army barracks in Northern Ireland. The Ramones looking like they had just come from a night hustling on the corner of 53rd and 3rd (which if the rumours are true, some of them actually had).

Penny Century look and feel like a gang too, but in their own, sweet way. They formed in a town called Ostersund, in the north of Sweden. And now, before they go on to play a storming gig at the tiny Henry’s Cellar Bar in Edinburgh, I’m outside with my iPod and mike, chatting to them.

When I say a gang in their own sweet way, that’s exactly what I mean. They are very much together as a group of friends, but they’re warm and friendly with it, genuinely grateful for what I’ve written about them before, and enjoying the brief tour of the UK of which this will be the final gig.

So, yes, I wrote a four and a half star review of Penny Century’s debut album, Between A Hundred Lies, but that’s because to these ears, it’s an album that is up there with the best of the year; Malcolm Middleton, Emma Pollock, Arcade Fire, Wiley, M.I.A, LCD Soundsystem.

Yes. That good. This ain’t no hyperbole.

So let’s introduce the band: Julia Hanberg is the lead vocalist, Kim Fastesson and Erik Persson on guitars, vocals & lyrics, Pontus Sillren on bass & lyrics, Martin Soderin on drums, and Markus Eriksson on piano and organ.

Their MySpace site has this to say:

‘ Originally playing in different punk, rock or indie-groups the six soon-to-be creators of the most beautiful northern popmusic imaginable met each other in their mid-teens. Since there isn´t much to do in this corner of the world you could by that age either pick up heavy drinking or start writing songs. Penny Century chose booth. It was actually on strangers balconies, in snowstorms on their way to parties or just during friendly afternoon drinking they really learned to know one another.

The songs often revisit this time of coming of age, a time of getting to know yourself and the best of friends at the same time. Other reacurring subjects of the lyrics is family, guilt and love- lost or longed for.
The tunes is the yellowed pictures of a family photoalbum, loveletters that never were sent or just damn good popsongs with great vocals, jangly guitars, soaring melodies and catchy choruses.’

Now, the longer I write about music, the more I find press releases are just so FULL OF IT, rubbish that means absolutely nothing,(other than a press officer who has failed to write in anything but clichés to try and sell an artist, giving me a cynical little laugh in the process).

But this time, it just feels so spot on.

This has been a short tour of one and a half weeks, their first time in the UK. A few days previously they had played Dundee. It had not been a roaring success, ‘the news papers had said a couple of days ago that the venue was closed, ‘ Julia says. ‘Not just closed, shut down!’ the others add, understandably a little frustrated a few days later. But they just put it down to bad luck. They had played a gig in Gosforth in a beer garden, which they liken to playing in Midsommer Murders. ‘He’s a suspect, she’s a suspect!’ they chuckle.

Of course, Penny Century are familiar with small towns, growing up away from the big metropolises that are in the south of Sweden. Hell, anyone who’s lived in a smalltown anywhere in the world knows that a survival instinct of sorts has to kick in, somehow. And it’s not about dealing with a dog-eat-dog world of the big city, but more about the fight for the right to dare to be an individual, in an insular world where being different can be all the excuse some meatheads need. I ask them about where they grew up. Was it a case of Alcoholism or music, and you chose music, with a little bit of alcohol on the side? ‘You could say that!’ They all went to the same school, and had played in various bands together, apart from Julia who says this is her first band.

Sweden has of course, produced a lot of great music over the years. The mighty Abba (and if you think I’m being ironic about that, I’ll come round and get you), The Wannadies, The Cardigans being some of the more high profile acts (let’s forget about the purveyors of ‘It Must Have Been Love’ and er, ‘The Final Countdown.’ God knows I’m still trying to). Do they see themselves as being part of a Swedish scene?

‘No, we are totally unique. We feel more Swedish than other bands when we are here.’

Do they feel compared to the Cardigans? ‘Yes, just because it’s a girl,’ says Julia, clearly a little weary of this. Perhaps understandably. By way of justification, the band point out that the Cardigans and Abba sound quite slick. This might come as a surprise to those people who have only heard their album – but it’s quite clear that Penny Century see themselves as being a punk band almost, and that’s the goal for their next record. Seeing them live, they do rock far more than the gentle pastoral indie pop of

Although they have put out four EPS in Sweden, they now find themselves in the ironic position that their album actually has to be imported into Sweden. The EPs they now tend to view as demos. I ask if they plan to release them in the UK, but it’s clear that it’s not high on their list of priorities right now.

This leads me to ask about one of the songs that is downloadable from their website ‘Summer Outside.’ It features the somewhat disturbing line ‘If I’m gonna suffocate, please let me see my strangler’s face.’ Is this dealing with domestic violence?

‘It’s more about your own ghosts, the ones you can’t see. The things that always scare you, that you can’t always control.’

We talk about the scene in Sweden. Whilst this may not get much coverage in the British media, there are certainly parallels, in that while bands may form in small, out of the way places where it can be quite hard to get a gig, they often end up gravitating to the big cities, like Malmo, Gothenburg, and of course, the capital Stockholm. Would they consider moving to Stockholm, to advance their career?

‘Been there, done that,’ chuckles Pontus. ‘We were in Stockholm for a year, then we lost the apartment and had to move back.’ But they indicate that they probably will move back there when they return to Sweden. But they hope to return to the UK, they’ve had a great response. And they deserve it!

‘You’re in for a real treat!’ they say before they go on stage, and indeed I am.

Both on album and live, Penny Century fulfil my expectations and more. Make a little room in your heart for them.

Penny Century -‘What I Never Learned To Say.’ mp3

Penny Century -‘Tangled Up In My Sheets.’ mp3

Penny Century’s album Between A Hundred Lies is out now on Letterbox Records.

It can be ordered here