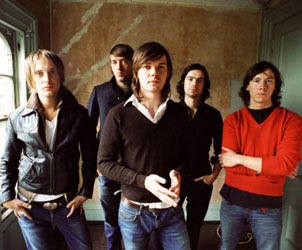 Great scottish acts I have seen on the bill together: Franz Ferdinand, Dogs Die In Hot Cars and Sons & Daughters at York Fibbers in October 2003. Fire Engines, Sons & Daughters and Aberfeldy at Edinburgh Liquid Rooms in December 2004. Aberfeldy, King Creosote and My Latest Novel at Edinburgh St. Bride’s Centre in April 2005…amongst many…and now this.

My first reaction, when Mrs. 17 Seconds and I arrive at Edinburgh’s Queen Hall, is ‘does no-one tell me anything? I knew that the Twilight Sad were supporting (hotly-tipped, mentioned on this blog, but as yet, unseen by me) but Broken Records, last seen supporting Emma Pollock at Edinburgh’s Cabaret Voltaire are here too? Just as well I rushed my long-suffering wife out of the house in time for the doors to open.

Seven piece Broken Records modestly describe themselves as ‘just a local, edinburgh band’ (just?! what do they think idlewild are, then?) but if they aren’t signed soon then something is wrong with this picture. Songs like ‘If the News Makes You Sad, Don’t Watch It’ and set closer ‘Slow Parade’ are songs that need to be heard. They take the passion of the Waterboys, and by mixing drones and good knows what else into it, make folk music for the 21st century. Despite seeming a little shy after their set when I approach them, this is serious music alchemy at work here. They are happy for me to post their songs on here and Mrs. 17 Seconds is already saying she wants to see them again. So do I. the singer’s voice is comparable to Jeff Buckley, not just in tone and quality, but in range, too. They deservedly win the audience over by the end of their all-too-brief set.

Glasgow’s Twilight Sad have set ears, minds and pulses racing with their debut album Fourteen Autumns and Fifteen Winters. This album should do well in the end of year polls, and not just in Scotland either. Live they make a glorious wave of noise to lose yourself in, and if titles like second song ‘That Summer, At Home I Had Become The Invisible Boy’ might seem unwieldy on paper, they are a joy live and I am not disappointed. looking at my notes, I appear to have put down the comment ‘like mogwai, if singing were involved.’ * Joined by Alan and Rod from idlewild for the last couple of songs, the coverage that has been awarded them is deserved, and should continue to grow.

It’s now over ten years since I picked up Idlewild’s debut single ‘Queen Of the Troubled Teens.’ Now going for a fortune on 7″ (well, about £50/$100) the band have developed and grown over the years, even with a few line-up changes along the way. By the time they go into ‘You Held The World In Your Arms’ -as their second song-the crowd is going mental. Mrs. 17 Seconds has long held the gig that I took her to for her birthday in 2005 as one of her favourites (supported by Sons & Daughters and Foxface -another great scottish lineup. This is closely followed by ‘When I Argue I See Shapes’ and ‘No Emotion’ from their most recent album, Make Another World. This might not have been the commercial success that The Remote Part was, but this is no reflection on Idlewild themselves. And as Roddy notes, ‘It sold a lot of copies in Edinburgh.’ ‘Course it did, boys, we still see you as one of ours.

Although this is Idlewild’s greatest hits tour, it should be no surprise to anyone just how many hits they have had over the last ten years, which also took them onto TOTP (how long til that returns?). ‘Little discourage’ (still my favourite)’American English’ ‘Love Speeds Us From Loneliness’ ‘I am a message’ ‘Everyone Thinks That You’re So Fragile.’ all of them still magical. They bring on close friend of the band Gavin Fox for vocals on ‘El Capitan.’

Alas, this song is not completed as the venue is evacuated due to a fire alarm. all credit to Idlewild, though; as soon as the fire brigade have given the all-clear, they’re back on stage, and the magic means that the pace is not spoiled at all and the magic is recaptured (apart from the two ______s who then sat next to Mrs. 17 Seconds and talked throughout the rest of the gig. Guys, that’s what the pub’s for). ‘Roseability’ and ‘A Modern Way Of Letting Go’ remind us just how diverse the singles were in musical styles, not just the albums. They don’t go off for the encore, but stay on, playing ‘Quee Of the Troubled Teens’ (the only time I’ve ever heard them do it), bringing the Twilight Sad back for a gloriously ramshackle version of The ramones’ ‘I Wanna Be Sedated’ and finish with ‘The Remote Part.’Even without Edwyn Morgan’s lines, this still gives you a shiver just thinking about it.

So another classic scots indie night out. A band still at the height of their creative powers, with two great acts following in their wake supporting. I was there, were you?

* yes, I am aware that there are human voices on Mogwai songs like ‘Dial:Revenge’ and ‘A Cheery Wave To Stranded Youngsters.’ You are very clever. Well done. They are largely instrumental, aren’t they, though? yes??