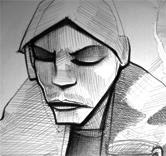 Where the hell did this come from? This follow-up to Burial’s self-titled debut from last year is one of the most astonishing things I have heard this year.

Given that Burial’s interview in this month issue of The Wire is a rare interview and that he is not prepared to be photographed, I know precious little about the man himself (well, that he’s male). So this really is about taking some at face value without bringing baggage to it. Because while this might be labelled under Grime (and definitely not Grindie, the vocals are manipulated with here, and that’s one of the astoundingly amazing things about this trail-blazing album), Dubstep, 2-step, whatever…it’s the sound of the pieces and the whole itself that amaze you and leave you gasping in disbelief.

Few albums can make such sadness sound so invigorating and a million miles away from the ‘woe is me’ aesthetic that can start to grate. This record is the soundtrack of, rather than just to, the beautiful melancholia of the urban winter, and the dark streets. It reminds me of the pioneering artists of the Bristol sound that came to be known as ‘trip-hop,’ certainly not in terms of songs but the way that the sound and mood of that music grabbed you, as much as the lyrics or the melody.

This is not going to be a long review, because I’m in the dark trying to describe this here. Please listen to the tracks below, and then go and buy the album.

I’m still astounded, and I’m having to re-work my planned best of 2007 list.