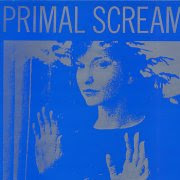 Every record collector has a list of the records they are absolutely desperate to get above all others. Mine is just too long (and there are other factors like, y’know, eating, getting to work, clothes etc..) to reproduce here, but it includes the first four Orange Juice singles on Postcard, all The Cure stuff I still haven’t got, and the first singles by both Primal Scream and the Jesus and Mary Chain.

However, one gap that was filled last year was the second Primal Scream single ‘Crystal Crescent’/’Velocity Girl.’ The latter opened the seminal c-86 tape (will have to post that here if anyone’s interested…?), which made no.4 in the 1986 Festive Fifty, even though its’ A-side wasn’t included. The three tracks come to less than six minutes in total, but it is a peach of a single.

Primal Scream are still going strong over two decades later, with stylistic and personnel changes along the way, and these tracks are not possible to get, criminally IMHO. The third track here, Spirea-X, was the name of a later Primal Scream off-shoot.

Anyway, hope you enjoy these…