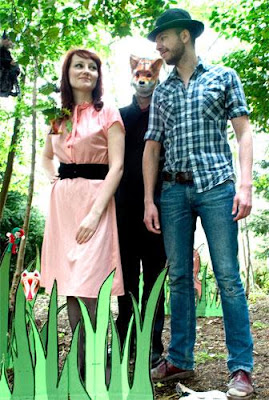 It’s a briskly cold February morning when I meet Michael and John in Glasgow’s West End for a coffee and to chat about Foxface, their album and that mask. We meet outside Tinderbox on Byres Road, the area you read about in Belle and Sebastian sleevenotes. What really chuffs me to start with is that they’ve come across from their respective parts of Glasgow just for this interview, and not like I assumed, that they’d be doing a whole day of press.

Foxface are: Michael Angus on vocals and guitar; John Ferguson on drums, accordian, banjo, and mandolin; and Jenny Bell on bass and vocals. [Jenny wasn’t there at the time of the interview, it wasn’t that she didn’t get a chance to speak, or anything like that].

I begin by asking how the band came together.

John looks at Michael and grins: ‘You can answer that one!’

Michael takes up the story: ‘Originally it was just me doing stuff on my own, solo with an acoustic guitar. But I got kind of tired of that, so I asked John if he wanted to help me out, do some keyboards and bits of drums…and then Jenny started playing the bass, and she joined Foxface as well.

When you were performing beofre, did you do it under your name or under Foxface?

Michael: ‘It started off under my name and then the three of us as Foxface.

I take this moment to come clean; that the only time I have seen them play live was three years previously, when they supported Idlewild and Sons & Daughters at a gig at the Usher Hall in Edinburgh. (This is my fault, not theirs, and they don’t offence). Do you all wear fox masks on stage?

Michael: No, we probably should. John’s the only one ugly enough to wear a mask on stage!

So was that something you did to avoid being identified by your students? [N.B. before the interview started, it transpires that both John and I are teachers]. Or taking the mick out of Peter Gabriel circa ’72…or?

John laughs. ‘Jenny had made up some masks, and Michael who played guitar had made a video, and I just put it on…they were made out of aAll-Bran packets. After a while they got soggy from sweat and started to disintegrate so a friend called Shane Connolly who makes puppets and masks, and he volunteered to make a mask and that’s what we’ve got now, which is a lot more durable.

Live it’s just the three of them, though they used other friends on the record. I take this opportunity to ask about the track ‘Can’t Afford To Go Away’ which reminds me of some of Nico’s solo work, particularly on Desertshore. Much of this record and its’ predecessor, The Marble Index are just voice and harmonium. Is this what they’re aiming for here? John explains that it’s a diatonic accordian played by a virtuoso friend called Andy Cutting.

The album This Is What Makes Us was released in November, through Gargleblast. Recorded in January and February last year, this is as sharp a debut as any to be released by any scottish band in the last few years. Gargleblast had a slight backlog of recordings to release, hence the slight wait in coming out. The band have a licensing deal rather than a record contract. Are they actively seeking a record contract? It would seem not: ‘Not really,’ they say in unison. ‘We’re trying to do most of it ourselves.’ They don’t like the idea of being tied to a label. At a time when EMI and others are shedding staff faster than a malting cat, this seems like a step towards genuine independence for a lot of bands. What do they make of Radiohead’s choice to release In Rainbows as a downloadable album, which fans could make donations towards?’ They chuckle about this. They acknowledge that its easier for Radiohead, as they’re quite rich, and their idea men came up with it, but they quite like it. They’re happy for me to post tracks on the blog, as I’ve asked. They had a bizarre experience recently when without being asked their music appeared on a skateboard video in America. They like the idea of more people hearing the music.

In Scotland they’ve received a lot from support from people like The List, The Skinny and Is This Music? but less support from further afield so far. In 2007, in addition to This Is What Makes Us, they also collaborated with Rody Gorman on the song Dreamcatcher on the Ballads Of the Book compilation. They were pleased to be involved with it, and it also represents a contiuation of a long link with its curator, Idlewild’s Roddy Woomble. Do they see Idlewild an influence or contemporaries?

John says probably more as friends. On their last studio album, Make Another World, Idlewild released a rock record more in line with 100 Broken Windows than more recent efforts which saw more of an interest and awareness of traditional scottish roots music. Foxface did support Roddy Woomble on the tour for his solo album, My secret Is My Silence, which is far more folk than any of his work as Idlewild’s front man, and indeed Michale played on the record and co-wrote several tracks.

So what are the major influences on Foxface’s sound? Michael says that it owes less to particular bands than to melody. They also draw links with The Royal We and Sons & Daughters, though they all bring something different to it. I say that I love Foxface because they sound genuinely scottish, including the fact that they sing in their own accents. I mention that I think that this in contrast to a band like Big Country. John comments, not unreasonably that this may have been to do with the time that Big Country were around, and how the Proclaimers were mocked for doing so. This seems to be a recurring theme as Scotland gains its own confidence in the twenty-first century. Closer to now they mention Tattietoes, but they don’t see there being a close-knit scene.

I mention that certain publications give the impression that there is this whole network and scene of scottish indie bands, which isn’t really there. Certain bands, like Belle and Sebastian, have built their own mythology. John and Michael point out that there are a lot of bands and scenes in Glasgow, such as Hip-Hop or Metal in certain pockets that you would only be aware of if you go to certain clubs. They try to cross-over and avoid it to an extent. We compare notes on Glasgow indie legends, such as the Pastels and BMX Bandits, and also how so many bands are still based here.

‘People are supportive,’ they say, ‘You feel supportive staying somewhere wehre other people are playing,’ and suggest that it can be a lot harder getting as decent a crowd in Edinburgh or Aberdeen. They have found that this grows with more regular playing, though they still find Aberdeen quite hard-going. But it can also get boring playing the same shows. This year they are hoping to play in Spain or Iceland. At the moment, the album’s currently available in Britain and Japan, though there is talk of the album being released in America. They’re thrilled that it was a Spanish internet Radio station’s album of the month, but this was due to them mailing the album off to them, rather than the radio station seeking them out. Another project this year is a soundtrack for an independent documentary, which is changing the approach of how they make music together. They’ve been given traditional Gaelic songs to base the music on and then finalise the music when the documentary. ‘It’s something we’ve never done before.’ There are plans that they will be part of a live performance at the Glasgow International Festival, in April at the Govan Shipyard. The film is as yet untitled, but deals with an anti-motorway campaign in Glasgow.

When we speak, Glasgow has just hosted its annual Celtic connections festival. Given that they incorporate a lot of traditional music, do they think there is a revived level of confidence, in terms of Gaelic and scottish culture? Culturally and politically, they say, there has been increase in scottish nationalism, without the unpleasant jingoistic element, ‘no tubthumping or flag-waving.’ They dismiss Tartan week as pure PR, understandably blame Runrig as being responsible for the worst possible views of scottish music but feel that there is a lot more pride in what is coming out of Scotland. We laugh about Groundskeeper Willie in the Simpsons and Mike Myers’ on-screen dad in So I Married An Axe Murderer, the totally ridiculous stereotype of Scots and Scotland approach, though as they finish in unison ‘In every stereotype, there is a grain of truth!’

Are they planning on doing a second Foxface album? They are, but Foxface all have day jobs and manage themselves. Whilst some people would see this as a constraint on music making, it removes many of the pressures that affect some bands where they have to kertow to the orders of a manager and record company. John says he likes the balance while Michael likes not having to make a living out of it, pointing out that when aspects of the music industry go wrong, you can forget why you’re in a band in the first place. They draw a link between artistic and creative satifaction of their jobs and their music. They look to do more events rather than just gigs, seeing it as being like organising a party.

Surprisingly, they have only played one gig this year and have no gigs line dup until April or May, but with no-one breathing down their necks, they can make their own conscious decisions. ‘We’re not consciously trying to change…but it will be interesting to see where it ends up.’ Their next step is to release their album on vinyl, joking that they want an expensive gatefold sleeve and an LED light.

Whatever’s next, keep us posted. Oh, and can I have a mask please?

Michael and John as consumers: