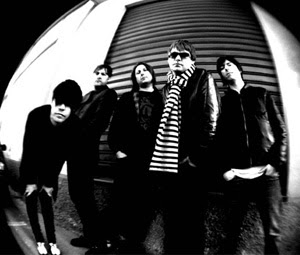 Album review: The Charlatans ‘You Cross My Path’

A few years back, watching the Charlatans at T in the Park, I turned round to my mate and said ‘ You know, I bet they’ll even outlast Blur.’ As it happens, this is true. Veterans of both Baggy and Britpop, while some of their contemporaries have even reformed (Happy Mondays and Inspiral Carpets), the Charlatans have survived a well-documented hell of a lot since the release of their first single ‘indian Rope’ back in 1990.

And now their tenth album You Cross My Path joins us. Alan McGee is telling anyone who’ll listen (that’s still quite a lot of us, actually) that it’s their best since 1997’s Telling Stories. It comes as the first album on the elephant’s graveyard, sorry, long-running indie label that is Cooking Vinyl, and until it is released in May is available FREE via XFM (see link below).

Right. Phew. statutory reference to survivor/longevity status and the download availability out of the way. So, is the album actually any good? Well, I don’t know that I would go so far as to agree with Alan McGee, but then my favourite album is 2001’s Wonderland. But it is another excellent collection of songs and it stands well against many of their other releases, and certainly heads high above both Between Ten and 11th and Us and Us Only. Opener ‘Oh! Vanity’ periodically threatens to go into Abba’s Arrival mixed with Big Country but holds it together well. The title track still sounds great (and indeed made the 17 Seconds Festive Fifty last year).

The tunes work well together, and whilst they don’t break any new ground, this should still bring a smile to the faces of their fans, though I wonder if some of the tracks will work better live. The production is a little lightweight, compared to some earlier albums, but it mercifully is not too slick. As more acts go down the download route, why not judge for yourselves?

It will be released on Cooking Vinyl in May.

The Charlatans’ official site is here

Their Myspace is here