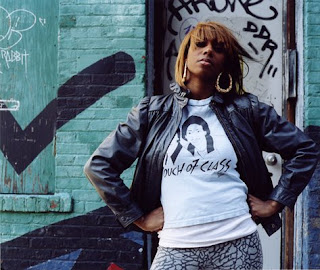 There is a real buzz building about Santi White, better known as Santogold, and it’s utterly, utterly deserved.

Tracks are starting to zoom around the net, and I can’t wait to get my hands on a copy of her album. According to her MySpace:

” Santogold is a survivor of a half-century worth of living along musical evolution’s most cutting edges. The only live act that can boast of having out-aged Barbara Bush, having outlived Mr. Miyagi and out-styled Liberace, Santogold is here with future flavor.

Already receiving weighty club rotation and airplay in urban Afghanistan and downtown Beirut, Santogold is the first act of the century to boast a post-war following on the International Space Station Mir. Following a live performance broadcast from three thousand miles off the Cape of Good Hope last June, inmates at Leavenworth Penitentiary received Santogold with a celebratory confetti parade. Just another first for the modern super group that knows no bound.”

Whether this is exaggerated or not (read the above again and make your own mind up), not only does it make great copy, but her songs are just fantastic. As cool as Kelis, sassy as Beyonce, as innovative as M.I.A, (all favourites round this blog)?

You better believe it.

Santogold’s debut album will be released in the UK on May 12 (lucky Americans get it two weeks previously). On this evidence, it will be taking up permanent residence in a stereo or mp3 player near you shortly thereafter.