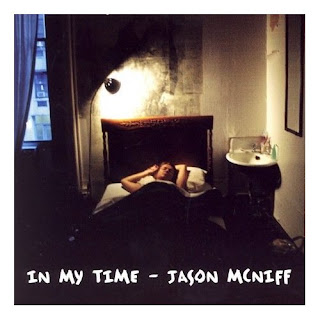 Jason McNiff -‘In My Time’ (Snowstorm)

Jason McNiff has been described as one of the UK’s best-kept secrets-and I’m going to try and expose that secret. I was sent this CD a few weeks ago by his PR; I’ve played this several times and am absolutely loving it.

In My Time is a mixture of compilation of old stuff and new songs, and originally intended for release overseas but now released in the UK as well. Over the course of twelve songs and fifty minutes, he utterly wins you over with his songs, voice and guitar playing.

Born of Polish/Irish descent, he has released 3 albums on London-based independent labels. He follows in a line of troubadours from the British folk blues of people like Bert Jansch, Richard Thompson and Nick Drake to the great American singer songwriters like Bob Dylan, Bonnie ‘Prince’ Billy and Leonard Cohen. Listening to this compilation is to be utterly won over by his work.

McNiff has spent time travelling in Italy, which has hugely influenced songs on this album like ‘Pilgrim Soul’ ‘Hills Of Rome’ and a cover of the Italian folk song ‘Bella Ciao.’ This anti-fascist folk song was an anthem during the second world War, though he notes in his sleevenotes to the album that it has earlier origins as a work song of the rice pickers of northern Italy. Consider it a cousin of Leonard Cohen recording of ‘The Partisan.’ I learned ‘Bella Ciao’ from teaching English to Italian students; he learned it from touring with the Modena City Ramblers. As for the gorgeous ‘Woody’s Annie Hall’ and ‘Pilgrim Soul’ these songs should be considered classics.

Listening to this album also encouraged me to look through the vinyl, and pick ut Michelle Shocked’s classic debut The Texas Campfire Tapes. In his sleevenotes to that album in 1986, Pete Lawrence -the man who held the tape recorder- speaks of meeting a young woman who’s spending a lot of time travelling, who has’ a gift with words and a turn of phrase unmatched since early Dylan.’ In 2008, I feel this applied just as equally to Jason McNiff.

It is time for Jason McNiff to be picked up by the British public and for the critical acclaim to translate into sales and recognition.

As a bonus, this is from his website, is not on the album but I thought you should hear it anyway: