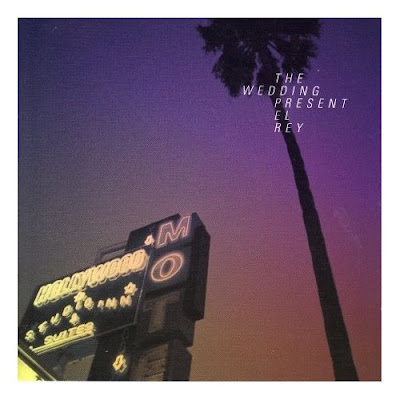 Inevitable about to be over-reported bit of information 1: This album was produced (or no doubt ‘recorded’) by the legendary Steve Albini, who was responsible for the Weddoes career highpoint Seamonsters back in 1991.

Inevitable about to be over-reported bit of information 2: David Gedge has moved to West Hollywood.

So, now into his forties and making the second Wedding present album since he resurrected the band in 2004, after a seven year rest, what does the new Wedding Present album sound like?

To these ears, dark and atmospheric. I can’t play the drums, but Albini has soaked up the drums and they make the atmosphere on this record absolutely wonderfully. It’s still unmistakeably Wedding Present; like The Fall, who were also stalwarts of the late John Peel’s show : always the same, always different.

Living in West Hollywood seems to have impacted on Gedge’s songwriting too. Not that this is a re-write of Rumours, Pet Sounds or (God forbid) Hotel California, but it’s noticeable. A few years back, many Morrissey fans, including this humble blogger, expressed surprise that Morrissey was living in L.A. It seems even odder that David gedge has moved there; the man sings and writes in such an English way. Not in an annoying little Englander kind of way, or a nostalgic for Arcadia of Pete Doherty or Ray Davies, but English none the less. There’s a sort of David Lynch sheen to the lyrics with the darkness that’s within. Gedge forever seemd to be not getting the girl; now it’s not someone he’s been abandoned by to go travelling or feels he can;t trust, as on ‘The trouble With men’ he tells of developing a crush on a woman who’s the dinner date of the man at the next table; who he wouldn’t mind being his girlfriend even though he’s married.

What hits the mark for me about this album is that not only is it another great addition to the Wedding Present/Cinerama cannon, but it’s Gedge and co. continuing to evolve as they progress into their third decade of making music. Last year he toured their debut George Best, marking twenty years since its’ release. This year, it’s a new album, an evolved sound, and one of the tracks of the year in ‘The Trouble With Men,’ a Weddoes song I think I’m going to love as much as ‘My Favourite Dress’ ‘Montreal’ or ‘Sticky.’

The Wedding Present -‘The Trouble With Men.’ mp3