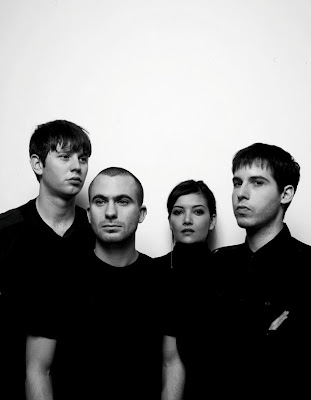 To be horror, I haven’t featured any new bands here in over two weeks, despite the fact I have certainly been sent them to write about and review.

Anyway, the above band are Voxpop. Hailing from London and featuring Alex who used to be in the Upper Room (who had an album out a while back, and two top forty hitsand were seen by this writer (!) as a support act long before they had their first top forty hit *get me!*), they deliver on the great indie pop front in great style.

Alexander, Rosalind,Beau and John are working with Paul Epworth who has worked with Bloc Party, the Futureheads, Kate Nash and Maximo Park and it sounds to these ears like it’s paying off.

They are currently unsigned (does that mean much in this day and age of internet saturation?) but Alex himself sent these five tracks to 17 Seconds Towers and I felt I had to share these with you:

This has got single written all over it:

This song is reportedly about the Motel where Sam Cooke was killed (didn’t Elvis Costello write Motel Matches about the same thing?)

…and I think this is another potential single…

and these two tracks are pretty great too:

Voxpop -‘In Love With The Modern World.’ mp3

Make friends with them at their MySpace here