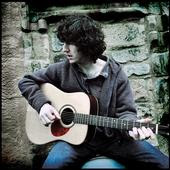 Chris Bradley’s Voices is described as being anticipated. It should be, even if you’ve never heard of him before. To describe him as a talented singer, songwriter and guitarist is rather like saying that Tiger Woods is quite good at golf, or that the Williams’ sisters are rather good on the tennis court: an understatement that doesn’t begin to get to grips with the facts. Quite simply, on the evidence of these songs he is one of the best. And you can quote me.

Bradley’s solo debut is a collection of twelve songs that shows a range of skills and twelve fantastic songs that reflect a wide range of influences. This Edinburgh-based man, who has travelled the world and been steeped in music from a very young age writes beautiful songs, but they are not predictable. This is not an album that takes one song and gives you a dozen more on a similar and rapidly diminishing theme. Rather, chord changes, lyrics and a vocal range that reminds me of Jeff Buckley’s in range, if not in sound, making me want to play the album again and again (it plays as I type and I’ve now played it three times in the last twenty four hours. Expect to see it feature highly in that most important of lists: the Seventeen Seconds end of year Festive Fifty Tracks and albums).

Last year he was invited by Riley Briggs to join Scottish institution Aberfeldy, which he accepted, adding yet another string to his bow. Briggs’ brother Murray features on drums on two tracks here, as does ‘feldy bandmate Ken McIntosh, and the original ‘feldy drummer Ian Stoddart. But judge this as a Feldy project at your peril: it’s one of the strongest albums I’ve heard this year. Tracks like ‘To My Ears’ ‘Hide & Seek’ and ‘Down I go’ are just three of an album full of highlights.

Do yourself a favour and track it down.

Instead of posting the tracks, why not watch this video?

Pop over and make friends at Chris Bradley’s MySpace