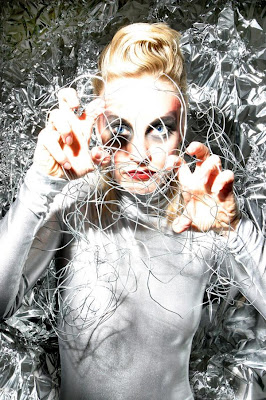 I arrived back at 17 Seconds Towers yesterday evening to find a package awaiting for me from One Little Indian (always a good sign). The CD inside, Fast, Cheap and Out Of Control contained a cigarette, (Marlboro I think, I quit smoking over six years ago, so it ended up in the bin, unlit obviously). But that was cast aside when I read the press release and then listened to the CD.

This is HK 119’s second album, the follow up to to 2006’s self-titled debut. It’s the solo project of one Heidi Kilpelainen, who hails from Finland and is a graduate of St Marton;s College in London. This astounding album suggests, as if we needed it pointing out, reminds us that in the year of MGMT and Santogold, electro-influence is where music is at, as the post-punk revival starts to slip away, though the gold of that era won’t be flung away. It’s POP, as it ought to be, clever, sophisticated, knowing and intelligent, arch, ironic, and artistic. Hell, even the first track to do the rounds from Mogwai’s latest album has a hint of this sound about it. It’s as European as can be, anyone who doesn’t get irony won’t understand it, and oh boy, is the joke on them. Fast, Cheap and Out Of Control? Don’t you believe it…

If HK 119 sounds like a product code, that’s because it is. Inspired by Lucas (think C3P0 or R2D2 – are we due a new RJD2 album?!), the album focuses upon themes like Space Travel, Mind Control and the irritation that is celebrity. Over the second track ‘Celeb,’ over a european jazz sound she sings ‘I took heroin, I took mescaline…I had deep desire to destroy myself from within…’ You could brainstorm for hours who she is talking about and have a list as long as your arm.

There’s a lot of diverse sound on here, as well as the aforementioned jazz on ‘Celeb’ there’s cool electronica and pop. Some of this will slay dancefloors over the next year, but other tracks will be snapped up for TV, Chill-out compilation and adverts before anyone can say ‘post-modern.’ The Guardian has already described her as a futuristic hybrid of Grace Jones and Debbie Harry, to which I would also add Nina Hagen and Nico.

There’s sixteen tracks here, over fifty minutes, and seemingly no filler. First single ‘C’est La Vie’ makes the Ting Tings sound like a bunch of kids playing by comparison (oh, hang on…) and album opener ‘Mind’ should be over the blogosphere before you can say Arcade Fire.

Another major shake-up to my best of 2008 list. Expect to see this feature highly elsewhere.