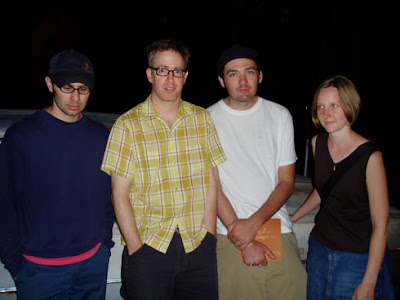 Snow Tires is Unbunny’s fifth album. It was originally rleased in 2004, but only now gets its’ European issue, through German label Affairs Of The Heart with two extra tracks from a long-ago deleted EP.

As their press release acknowledges, Unbunny flies under the radar, but there is definitely an audience out there for this band. (As to whether the people who ultimately make the decisions about what most of us get to hear or buy will concur may remain to be seen.) It’s rightly described as being music that waits in a corner for people who need it to find it. It is utterly fragile music, some have mentioned Elliott Smith, but to these ears it’s more reminiscent of Belle & Sebastian in the early days, yet more heartbreaking. Comparisons with Neil Young on Harvest are perhaps closest to the mark. This isn’t indie music of the stadium filling variety nor the jangling variety, it’s the whisper who dares variety.

Jarid del Deo writes from the heart and and is unquestionably articulate. Some will pigeonhole this under ‘fey’ or ‘twee’ but it’s beautiful on its’ own terms. It’s perhaps unlikely to convert people who don’t like this sort of music, but for those who do, a treat is in store.

Snow Tires is released on Affairs Of the Heart on September 1.