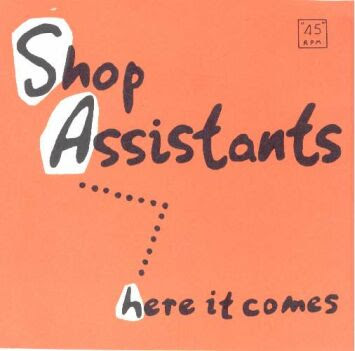 Yes, it has been at least a month since I had a Shop Assistants fest here. I’ve long written about my love for this excellent scottish band on 17 Seconds, and for this post I am actually going to focus on the last two singles the band put out.

Having issued four singles between 1983 and 1986, and an album, The Shop Assistants (also known as Will Anything Happen) in 1986. The band then split or went on hiatus when singer Alex Taylor went off to form Motorcycle Boy with members of Meat Whiplash. In 1989 the Shop Assistants reformed/were reactivated and produced two more singles ‘Here It Comes’ and Big ‘E’ Power.’ the line up was now:

Sarah Neale – vocals (previously the bassist), Laura McPhail on bass (previously the drummer), David Keegan (always the guitarist) and Margarita Vasquez-Ponte of Jesse Garon and the Desperadoes on drums. In 1990 David Keegan joined the Pastels full time and the band split for good. The two singles were released on the Avalanche label, set up by Andrew Tully from Jesse Garon and the Desperadoes.

Shop Assistants – ‘Too Much Adrenalin.’ mp3 (really, only one E. No gags intended).

Shop Assistants – ‘I’d Rather Be With You.’ mp3 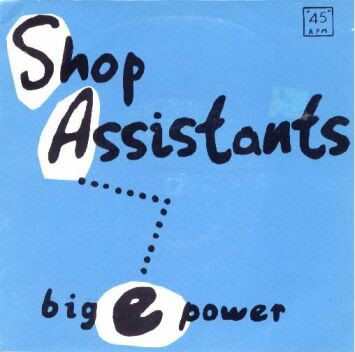 Shop Assistants – ‘She said.’ mp3 (A cover of the Beatles song from Revolver)

I have said it before, I’ll say it again: read Tom’s pages on the Shop Assistants here. There is also due to be a compilation of Shop Assistants’ stuff released later this year.

This link will take you to Avalanche records’ ebay site where you can buy many of the records mentioned here.