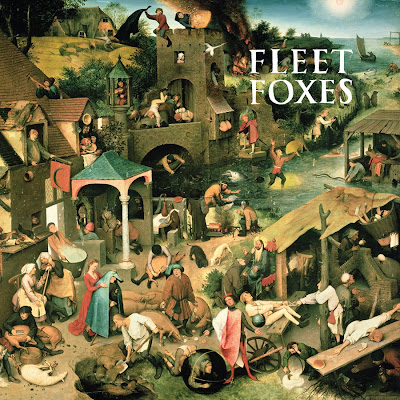 Ever felt that you just had to find out about a band, even though uyou had never heard a note of their music? Yes? No? NO?!?! Well, I was kind of intrigued by Fleet Foxes, on the grounds that a) the cover of their full-length, self-titled debut LP looks like a Brueghel/Flemish picture (cue smug reader telling me that, actually blah blah whatever) b) they are signed to Bella Union in the UK and Sub Pop in the US, which is kinda like having your cake and eating it. Not to mention the fact that they come from Seattle.

So God bless emusic, last night I downloaded both their debut LP and the five track EP Sun Giant…dammit, they are good. I have now realised that Americana is not just shorthand for people who like Country music but hate Billy Ray Cyrus, this is music that actually blends in so much American sounding music, and it sounds rootsy, real, some of it’s acapella and there’s a nice bit of a baroque feel as well. They say they grew up listening to the music of their parents…and it’s produced something that sounds excellent.

Give these tracks a listen, and please let me know what you think.