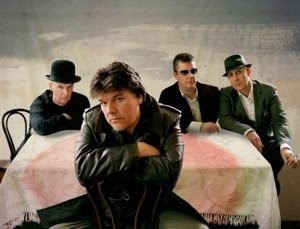 Eighteen years after they last played together, this year sees the return of The Blow Monkeys. The four members, Neville Henry, Mick Anker, Toney Kiley and their charismatic singer the legendary Dr. Robert are back together and…it’s fantastic.

With reformation albums (and you can probably ask the Verve about this), there are going to be difficulties, surely? Well, no, not here. Because whatever those flies on the wall witnessed, the end result is fantastic. The band are certainly not retreading old ground, but producing fantatsic songs that genuinely can add to their canon. There are no re-writes of ‘Digging Your Scene’ ‘Choice?’ or ‘It Doesn’t Have To Be This Way’ but rather, songs that came together without the machines taking over, as Dr. Robert himself acknowledges happened in the eighties. He says that songs like the gorgeous ‘A Momentary Fall’ and the fabulous single ‘Bullet Train’ take them into areas they’ve never been before. To listen to a song like ‘Wait’ now reminds you of how they investigated new ground, but also that they were machine driven at the time, and they sure as heck are not now.

So is there still a ‘glam jazz swing’ element to their music? Well, it’s there, in part, but it feels fresh because they are making something new, rather than treading new ground. And that’s the best you would want from any band, especially eighteen years since their last album. They always mixed up a huge variety of influences, and that continues.

Good to have you back, guys. Don’t leave it eighteen years next time.

Devil’s Tavern is released on September 8 on Blow Monkey music.