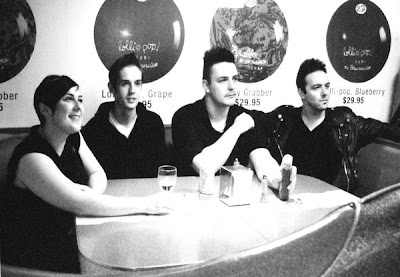 …and still they rise. With just a matter of hours to go before their debut LP is released, Glasvegas headline Edinburgh’s Liquid Rooms. Their current UK tour has completely sold out, this date sold out within 24 hours, and tickets are changing hands for £50 on ebay. Right the way up the street, the touts are begging to buy tickets (about time they were clamped down on, once and for all).

So, can Glasvegas cut it live? You betcha. The sense of expectation once inside the Liquid Rooms is intense. Making our way up to the balcony, Mrs. 17 Seconds and I and our friends can barely see the stage, but we’re swept away by the atmosphere. With chants of ‘There’s only one James Allan’ and ‘Here we, Here We, Here We f****g go’ the sense of expectation is immense.

And from the minute they wallk on stage, until they walk off, Glasvegas deliver. And how. They come on stage, tear straight into ‘Flowers and Football Tops’ and it’s brilliant. They don’t pause for breath for the next forty minutes as they play songs from their self-titles debut. ‘Lonesome Swan,’ ‘It’s My Own Cheating Heart That Makes Me Cry,’ ‘S.A.D. Light,’ Polmont On My Mind,’ ‘Geraldine’ all go by in almost a blur. The band acknowledge the audience, but don’t milk it, preferring instead to make the music speak for itself. ‘Go Square Go’ gets a rapturous response. ‘Ice Cream Van’ reminds us of how sad and epic they can be. Finally they finish with ‘Daddy’s Gone’ the song that’s gone from a limited 7″ to a major anthem in the space of less than a year.

No longer the next big thing, Glasvegas are the sound of now. We walk out, on a wave of good feeling that lasts right into the next day. This is a band who matter.

[Thanks is due to James Allan, who when I interviewed him said they’d stick me on the guest list next time, and his sister/manager Denise who did. And not least to Ken for getting Mrs. 17 Seconds in as a +1).