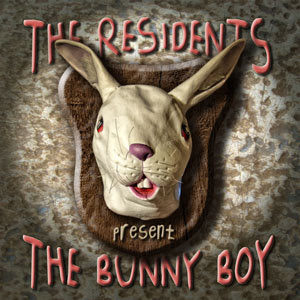 Some things you just can’t make up…

“Not long ago, an unsolicited DVD arrived at The Residents’ studio. Since the location of the group’s private inner sanctum is a closely-guarded secret, the appearance of the disc was definitely regarded as a little strange. Other than the occasional piece of junk mail, nothing ever arrived at The Residents’ intimate work space without an invitation. But the envelope containing the disc bore a familiar return address, so, after first ignoring it for a few weeks, The Residents finally opened the package and put the disc, crudely-labelled “Postcards From Patmos,” into a DVD player.

Fascinated, the group watched as a most curious document unfolded before their eyes. It seems that a former colleague, known to everyone as “Bunny”, had become convinced that his brother had disappeared on the Greek island of Patmos. After weeks of vainly attempting to get assistance in locating his lost sibling, the man detailed his plight in a series of videos. Technically inept, The Residents’ former friend was reaching out to them for assistance. It seems the man had heard of YouTube and other internet video websites, but he had no idea how to upload his pathetically primitive cry for help.

Uncertain as to whether they were watching evidence of a real problem, ignored by friends and authorities, or the gradual breakdown of a once-stable personality, The Residents were nevertheless moved by their friend’s dilemma and immediately decided to offer their help. Using their colleague’s return address and last-known phone number as starting points, they attempted to reach him but got no response. Determined, they contacted other friends and former co-workers of the man, but no one had seen him for months. It was as if he had disappeared.

The group then thought the best solution was to upload their friend’s video exactly as it was given to them, but after watching the DVD several times, they came to the conclusion that it was simply too crude – even for YouTube. The lighting, sound quality and camera work were so substandard that their friend’s cry for help would never be seen. While posting the videos might be a labour of love, the group’s energy and affection was obviously misplaced. But what could they do?

After brief consideration, the answer became obvious and the original “Postcards From Patmos” DVD became the inspiration for The Residents’ latest project. Changing the name to The Bunny Boy in honour of their missing friend, the group recorded an album of pop songs based on the contents of the original DVD. Then, continuing to feel pathos and inspiration for their colleague’s situation, they re-created the original “Patmos” videos.”

So what does it sound like? Weird, oddly listenable, and one you keep coming back to.