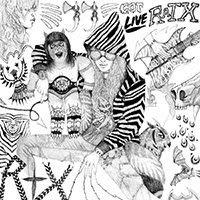 Four years ago, Royal Trux was disbanded by its’ founders and main runners Jennifer Herrem and Neil Haggerty. This is the third album that ‘junkie icon guitarist’ Herrema has put out under the RTX banner.

Being on Drag City, rightly or wrongly clearly makes this violently cool, to a certain sorta indie hipster, though the roots of this album have far more to do with pre-grunge metal. Not the eighties boys who spent more time on their hair than thier riffs, but those who had Sabbath, Zeppelin and Van Halen running through their veins. The fact there is a picture on the back of a girl with a leather jacket with a picture on it of a tiger gives you the sorta aesthetic we’re dealing with here. Though with a fair bit in common with the likes of early Mudhoney and Royal Trux too, obviously…

So, is it inventive? No, but it’s a lot of fun, and it has a hell of a lot of balls. The sort that would see the likes of The Darkness off pretty quickly, whiilst threatening the likes of The Black Crowes and ZZ Top into leaving pretty sharpish while they were at it. There’s a cover of the barbarians’ ‘Are You A Boy or Are you A girl?’ which given how scary Herrema can no doubt be at times, seems quite appropriate.

In this day and age, this kinda seems almost violently anti-commercial and perhaps all the better for it.

J.J. Got Live RaTX is released on October 20 on Drag City.