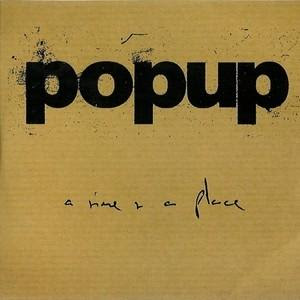 Popup have now been around for several years, but this is their debut LP. And instead of rushing it at the first whiff of interest, it’s paid off that they’ve developed it over time. Debut single ‘Lucy, What You Trying To Say?’ was released over two years ago, and appears again here. The album has been made with help from the Scottish Arts Council (now that’s what I pay taxes for, not for bombing the shit out of countries where the infrastructure’s already collapsing).

Whilst some idiots (without listening properly) might dismiss them as ‘another jangly guitar band from Scotland’ more fool them, frankly, because there’s excellent tunes on here, and some fantastic lyrics, that can hold their own with the likes of Pete Doherty, Alex Turner and fellow-countryman Aidan Moffat. I think my favourite might well be ‘we shared a cigarette/turned out he had tourettes’ from the aforementioned Lucy…

Over the course of thirteen tracks, right from opener ‘Love Triangle’ to closer Lucy, there’s witty, biting lyrics and excellent tunes. ‘Love Triangle’, by the way, is about siamese twins cheating in love. This is a warm, exciting debut that makes you want to hear it again and again. Whilst much of the plaudits at the moment for debut albums for scottish bands are for Glasvegas, let’s make sure that we all pay heed to Popup.

A Time And A Place is available to download now on iTunes and eMusic, and is released on Art Goes Pop on October 6.

Lucy, What You Trying To Say?