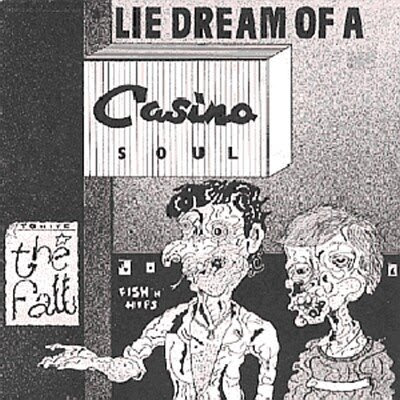 ‘I spurn [people who do not like them] with my toe.’

John Peel on his favourite ever band, The Fall.

How excited am I about seeing The Fall tomorrow night?

Oh, you know, it’s only got me through the more difficult classes that I’ve had this week and given me the opportunity to re-read Mark E. Smith’s autobiography, and play Slates this afternoon and re-listen to Live At The Witch Trials as I type. It should be noted that this album was not a live album (though obviously there have been live debut albums before, MC5, Jane’s Addiction and 22-20s spring to mind…)

The autobiography is great, taking no prisoners and making no apologies. It’s not a conventional autobiography but then, this is Mark E. Smith we’re talking about here, what do you expect?!

One of the things that clearly irritates him is people who think that his former wife Brix Smith was responsible for bringing a poppier element to The Fall when she joined in 1984. He is also clearly irritated by people who haven’t done their research.

This post kind of ties those two ideas in together and focuses on the ‘Lie dream Of A Casino Soul’ with its’ b-side ‘Fantastic Life’. Released a handful of months before their seminal Hex Induction Hour LP in 1982, this 1981 single’s a-side is, surprise surprise, talking about the famous Wigan Casino, the home of Northern Soul. According to the sleevenotes of the re-issued Slates, Smith was getting fed-up of people who only seemed to have just discovered soul. Surprisingly, he did like Dexy’s Midnight Runners. The b-side is gloriously poppy, and this is before he even met Brix…

This Fall website is unofficial but seems to be fairly comprehensive

The Fall on wikipedia (I own thirty Fall albums and I feel like I’m still only scratching the surface!)