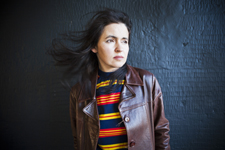 Hello, and a Happy New Year from 17 Seconds!

Emma Pollock will release her third solo album In Search Of Harperfield on January 29. Following the demise of The Delgados in 2005, it’s her third solo album, following on from 2007’s Watch The Fireworksand 2010’s The Law Of Large Numbers. This year also marks the 21st anniversary of Chemikal Underground, the seminal Scottish indie label she co-formed in 1995.

The first single to be released from the album is ‘Parks and Recreation.’ To be released on January 22, it captures her younger self involved with fights down the local park, trying to decide whether to fight or flight is the best response, when all she’d rather do is feed the swans or play basketball.

In Search Of Harperfield is released by Chemikal Underground on January 29.