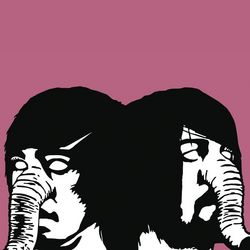 To be fair, my girlfriend and I have actually agreed on many, many bands. We discovered My Latest Novel together, seeing them a fair few times before they even had a record out (including buying tickets for them supporting Smog last year, purely to see MLN). However, I discovered that early on I had nearly caused her to finish with me because I denounced Zero 7 as ‘coffee-table music for over 30s.’ Whoops. I have since decided that was an unfair, ageist remark and this album is worth investigating.

She finds Death From Above 1979 too aggressive, and finds Pete doherty an arse. You can’t win them all, I guess. But she found me a copy of The Cure‘s Killing An Arab 7″ on Small Wonder (their interpretation of Camus’ the Outsider and most definitely not a racist song, just in case someone hasn’t heard it) for my birthday, so I guess we’ll just have to agree to disagree on these two:

The Libertines – ‘Up the Bracket.’ mp3

As always, if you like The Libertines‘ or Death From Above 1979 tracks, follow the links in this paragraph and go and buy the albums! (And yes, I did discuss this post with my girlfriend beforehand..)