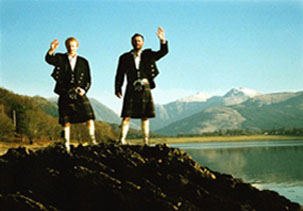 I’ve got to be honest, I’m starting to worry slightly. Since I started this blog about two months ago, at least three of the bands in the right-hand column have split up. First there was Death From Above 1979. Then Hope Of The States called it a day. And now Arab Strap have decided that, ten years since ‘The First Big Weekend’ appeared that they will finish.

It’s amicable enough and you can read all about it here on the Chemikal underground website. It just seems a sad, sad day for music, especially for my beloved scottish indie scene but uncharacteristically, the press release says it more eloquently than I could.

The band leave behind a fabulous back catalogue; check it out at the band’s own website, and on insound. They were a truly unique band, who wrote about life honestly, and recognised that sometimes being honest may not always be easy, or easy to listen to. ‘I work in a shit bar…’ from ‘I work in a saloon’ or the immortal ‘It was the biggest cock you’d ever seen. but you’d no idea where that cock has been’ has passed into folklore, from the opening track on 1998’s Philophobia, Packs Of three. Peurile? Only in the same way that some people might accuse Trainspotting of being pro-heroin; that you’re not lokking at the whole picture and just dealing with the first bit you encounter. Personally, the most resonant lines for me are from ‘Here we go’, again from Philophobia:

” How am I supposed to walk you home, when you’re at least fifty feet ahead?’

Buy Arab Strap on Amazon. I recommend starting with eiether The Last Romance or The Week Never Starts Around Here.

Thanks for the music and musing, guys…