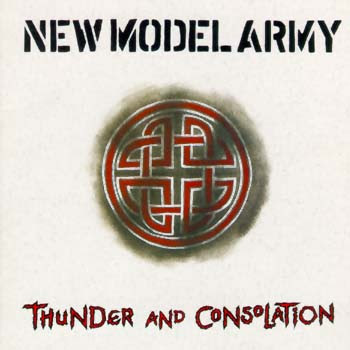 A new series at 17 Seconds

History is full of those bands who are presented, by a sometimes revisionist music industry and journalism, as being little more than footnotes. Many bands may not often grace front covers or have their records played on mainstream radio, yet can fill massive gig venues, and, most crucially, have a loyal fan base that will stay with them for years (as opposed to, say, the teen market, which can turn on their heroes as quickly as each other in the playground).

One band who this definitely applies to is New Model Army. Sneered at, seemingly largely for failing to come from London and the fact that some of their followers may have worn clogs, New Model Army formed in 1980, around the nucleus of Justin Sullivan, who still leads the band today. their sound genuinely incorporated many diffrenet styles (as opposed to those who cliamed to whilst ripping off the same sources). Their debut album, Vengeance, was released in 1984. They signed to EMI for their second album No Rest For The Wicked, for which other ‘alternative’ bands attacked them, including Chumbawumba*. They made it onto ‘Top Of The Pops’ to play the album’s title track, (in)famously sporting t-shirts bearing the legend ‘Only Stupid Bastards Take Heroin’ with the word’bastards’ taped over. The following year’s The Ghost Of Cain, was their best yet, with a continuation of their fantatsic songs of urban life. Opener ‘The Hunt’ was later covered by Sepultura.

But it was 1989’s Thunder and Consolation that showed the group had hit new heights. As well as their post-punk sound, the album also featured the violin of Ed Elain Johnson, adding a folky approach. The pinnacle of the album is ‘Green and Grey’ which deals with the claustrophobia of the small northern towns in England, where unprovoked violence can erupt at any moment, those who escape it for the rbight lights of the city, and those they leave behind:

The time I think most clearly, the time I drift away
Is on the bus-ride that meanders up these valleys of green and grey
I get to think about what might have been and what may yet come true
And I get to pass a rainy mile thinking of you
And all the while, all the while, I still hear that call
To the land of gold and poison that beckons to us all
Nothing changes here very much, I guess you’d say it never will
The pubs are all full on Friday nights and things get started still
We spent hours last week with Billy boy, bleeding, yeah queuing in Casualty
Staring at those posters we used to laugh at:
Never Never Land, palm trees by the sea
Well there was no need for those guys to hurt him so bad
When all they had to do was knock him down
But no one asks to many questions like that since you left this town

Ch: And tomorrow brings another train
Another young brave steals away
But you’re the one I remember
From these valleys of green and the grey

You used to talk about winners and losers all the time – as if that was all there was
As if we were not of the same blood family, as if we live by different laws
Do you owe so much less to these rain swept hills than you owe to your good self?
Is it true that the world has always got to be something
That seems to happen somewhere else?
For God’s sake don’t you realise that I still hear that call
Do you think you’re so brave just to go running to that which beckons to us all?

Ch: No, not for one second did you look behind you
As you were walking away
Never once did you wish any of us well
Those who had chosen to stay
And if that’s what it takes to make it
In the place that you live today
Then I guess you’ll never read these letters that I send
From the valleys of the green and the grey

This album is, frankly, an underrated classic. New Model Army continue to record and tour, and have a very committed folllowing over the world, even if the music press in the UK either sneered or ignored them altogether. They have relased nine studio albums as well as live albums and compilations. Their webpage can fill in more info.

This album can be bought here. During a conversation with Joolz Denby in 2001 (-Justin Sullivan’s partner, who also has been responsible for the groups art work, as well as amassing a fantastic career of her own. See www.joolz-denby.co.uk for more information about her own very varied and fascinating career), she told me that Chumbawumba’s alice Nutter had, in fact, apologised to Justin in person for her earlier attacks. Chumbawumba later themselves signed to EMI.