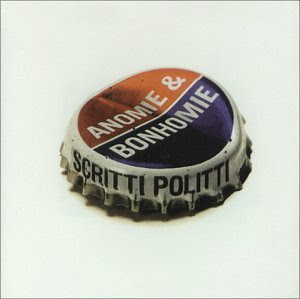 What was I listening to in 1999? Umm, it seems so long ago, and somehow I can focus far better on the stuff from the earlier years of the decade. Though ever so occasionally, I give Bellatirix and daawn of the Replicants a spin, and it reminds me of the final undergraduate year, trying to get my own band off the ground and then staying on at uni to do my Masters.

One great album from that time is Scritti Politti’s Anomie and Bonhomie. At the time, this was their first album for eleven years, since Provision. The last time we had seen Green Gartside and co., it had been doing a fairly average (if we’re being honest) cover of the Beatles ‘She’s a Woman’ with Shabba Ranks in tow.

This album, however, combined a lot of what Green had clearly been listening to – Reggae, Nirvana , and lots of Hip Hop, and made an absolute gem of an album. It’s a confident album, without some of the sheen which almost engulfed Provision at times. It featured contributions from Mos Def, as shown on the single, ‘Tinseltown To the Boogiedown.’ Opener ‘Umm’ also managed to start off almost fluffy, before taking in rock -when had we ever heard Scritti rock before -and hip hop, all within the space of four minutes and fourteen seconds. Granted ‘First Goodbye’ shows off Green’s amazing voice but is a bit like Westlife-type ballad (who I wasn’t listening to in 1999, at least not out of choice). The voice is still supreme and you got the feeling that this was a record that he wanted to make.

It was great to see Green put out another labum last year, White Bread Black Beer, back on his original home of Rough Trade, touring for the first time in 26 years, and getting press coverage. Whilst 1982’s debut Songs To Remember has had a lot of publicity again in recent years, as the post-punk revival continues, this is my favourite Scritti album in many ways. Let these three tracks whet your appetite.

Buy Anomie and Bonhomie here for less than a fiver.