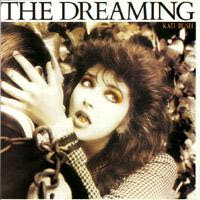 The Dreaming, Kate Bush’s fourth album was released in 1982. It’s fair to say that Britain had never produced a female artist like her. A truly independent artist, who grasped the power of the medium of the music video, who had studied mime and could write amazing songs. Never afraid to tackle difficult themes, including incest (‘The Kick Inside) and homosexuality (‘Wow’ and ‘Kashka from Baghdad’), and drew inspiration from unusual sources (‘Infant Kiss’ was inspired by The Innocents, the filmed version of The Turn Of The Screw). She also began to produce her own records. The sound of her music may have owed almost nothing to punk, but the creative spirit than continues to run through her music has much to do with the creativity, experimentalism and individuality of what has become known as post-punk.

So by 1982, the world should have been hers for the taking. What the record company were probably not expecting, as post-punk faded and the prevailing aesthetic became shiny rather than scratchy, was The Dreaming. The title track referenced aboriginal culture and featured Rolf Harris on didgeridoo. And that kind of experimentalism (or madness, as many fans and critics saw it at the time) wasn’t confined to that track. The braying donkey sounds that close final track ‘Get Out Of My House’ seem designed to unsettle.

Yet though the album only produced one UK Top 40 hit, ‘Sat In your Lap’ with a seemingly demented piano riff that might have unnerved the more MOR end of her fanbase, the songs are gorgeous too. My personal favourite is ‘There goes A Tenner’ which bombed as a single in the UK (though reportedly a Top 10 hit in Ireland). It deserved to be a hit.

It’s a cliche, but maybe the problem with The Dreaming was that it was too ahead of it’s time. It’s dated extremely well, and it’s quirkiness is one of it’s many charms. Yes, it’s bonkers, but then when Bjork’s bonkers it’s considered cool.

The follow-up album is The Hounds Of Love, which she laboured over, concerned about what would happen if she was too bloody-minded (‘Running Up That Hill’ should really have been called ‘A Deal With God’ but her record company talked her out of it, fearing that invoking the almighty’s name would mean that she wouldn;t get airplay. Kate wasn’t Cliff Richard, after all!) It’s the album that consolidated her as a long-term player and meant that every kate Bush album afterwards would be an event when it arrived after an everlong gestation period. But The Dreaming, comparitive commercial flop though it may have been, explains why she is so revered by so many. There’s many who have been influenced by her, not just female singer-songwriters either, but male guitar bands.

And if we have to wait another decade for the next album it will be worth it.

Kate Bush-‘Night Of The Swallow.’ mp3

Buy The Dreaming here. These mp3s will be up for one week only. If you like what you hear, go and buy it!