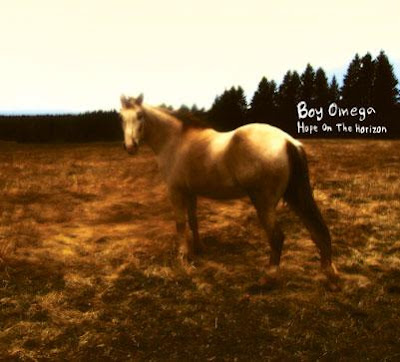 So, who is the next singer-songwriter to get blogland in a flurry of writing and praise? Well, if I have anything to do with it, it’s a young man from Sweden called Martin Henrik Gustafsson, who records under the name Boy Omega.

Though his previous efforts were more of a solo effort, with an electronic feel, this album has much more of a band feel. And, as almost a refreshing difference, as a result of listening to albums like Blonde on Blonde and a lot of Phil Spector, he has produced one of the warmest sounding albums you will hear all year. Reprotedly ‘more is more’ became the catchphrase in the studio, and boy, has it paid off.

Whilst comparisons with his vocal style with Bright Eyes’ Connor Oberst are inevitable, and there are definite hints of Elliott Smith, Sufjan Stevens and Arcade Fire, the sound here, right from the off with opener ‘A Quest For Fire’ is distinctive and special. An album that lyrically owes a lot to what could losely be termed the human condition, this is one of the best things you will hear this year. This is just too good to remain a fringe thing.

‘Hope On The Horizon’ is released on Stereo Test Kit on November 5.

From Hope on the Horizon:

From The Black Tango

From The Grey Rainbow (mini-album)

Boy Omega -‘From Us To Eternity.’ mp3

And, as ever, please met me know what you think, and if you like what you hear, go buy it from your local independent record store!