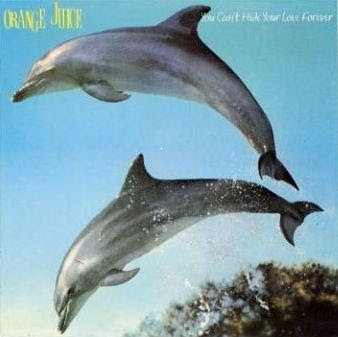 For today, I would like to focus on what is my second favourite scottish album of all time, behind the Jesus and Mary Chain’s Psychocandy, and one of the best debut albums ever.
This album was released in 1982, and was Orange Juice’s official debut, although many of the songs had been intended for a debut album on the seminal, legendary Postcard label that would not appear until 1992 as Ostrich Churchyard. With their influence noticeable on many Glasgow bands of now, such as Wake The President and Bricolage it would be great to hope that people would go and investigate and buy the album…if they could get their hands on it.

Unfortunately, this absolute classic of an album is not currently available on any format in the UK, neither CD nor vinyl, nor is it downloadable at iTunes or eMusic. In all seriousness, I think Polydor (or whichever soft drinks company it’s part of now) should make this album available to buy again. It’s like the insanity that prevents many seminal works being out of print be they music, film or the written word. Why? For the meantime, I will post it here for the next two weeks. To me this is a work of art, beautiful songs and something that lovers of ‘indie’ music (and I mean that in as many senses of the word as possible) should hear.

The influence of this album can be heard in The Pastels, The Shop Assistants, Camera Obscura, Belle and Sebastian, The Delgados, Franz Ferdinand…and the Smiths.

Never heard it? Well, now’s your chance, if you don’t have the money to buy a hugely expensive import copy: I have used my USB turntable to transfer it into mp3 format. The vinyl’s in pretty good nick, though there may be the odd crackle here and there. As John Peel used to say ‘life’s got surface noise.’

Orange Juice -‘Three Cheers For Our Side.’ mp3

Orange Juice -‘In A Nutshell.’ mp3

DISCLAIMER: I freely state here and now that I do not own the copyright to this recording, so if you download this in a country WHERE YOU ARE FORTUNATE ENOUGH TO BE ABLE TO BUY IT, THEN SHAME ON YOU. If you download this and like it, please buy the album if it becomes available again.

UPDATE: Since I did this post, JC over at the Vinyl Villain has put together a post which has the opportunity to acquire everything Orange Juice ever did, pretty much, with money going to charity. You have therefore, twenty four hours to get the mp3s off here without giving any money, but I’d rather you went to this post and found out how you can help.

Links now removed -get thee to the Vinyl Villain’s blogspot!