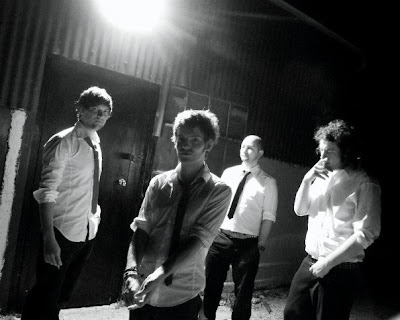 Another mp3 I got sent a few days ago, and many thanks to Phil for getting in touch to send me the mp3 and a copy of the EP.

The Winchell Riots were formed from the ashes of Fell City Girl and are an Oxford-based four piece who have clearly been kicking up dust, as it were in that town. They have supported iLikeTrains and Kraftwerk/Neu founding member Michael Rother. Their press release says that they mix up Bjork, Sigur Ros and Death Cab For Cutie which produces a sound that manages to both both epic, rocky and ethereal, quite often at the same time. No mean feat. their name comes from a chapter in a Philip Roth novel ‘The Plot Against America.’

The EP will be released on April 28 on Andrew The Great Records. It’s a limited edition of 300, so get your act together now and pre-order it. They are playing ten shows in England throughout April, and hopefully will make it north of the broder sometime soon. On the strength of this EP, see them while you can still see the whites of their eyes.

And here’s the video too…

The Winchell Riots: Histories from adam deeves on Vimeo.