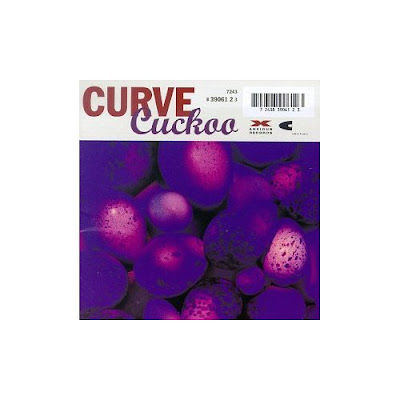 Ah, Curve…fronted by the wondrous Toni Halliday and her partner in crime, bassist, Dean Garcia, in 1991 Curve released three fantastic EPs (Blindfold, Frozen, Cherry) on the Anxious label, owned by Dave Stewart. They were part of the shoegazing movement, and bridged or perhaps blurred the gap between Goth, Indie and Shoegazing. They had two entries in the 1991 Festive Fifty and recorded three peel sessions. In 1992 their debut album Doppelganger came out, earning them two top 40 singles. By the following year they were ready to release their second album, Cuckoo. Opening with the wondrous ‘Missing Link’ this was a strong set, but the public seemed to be moving on. After this album came out, the band went on a hiatus for several years, during which time Toni recorded the vocals on ‘Original’ a track on Leftfield’ seminal 1995 LP Leftism, which became one of that year’s defining albums. Guitarist Debbie Smith, meanwhile, joined Echobelly . Toni and Dean finally called time on the band in 2005.
Although unavailable on iunes UK, the compilation of those fabulous three EPs, Pubic Fruit and the debut are available through Amazon, but Cuckoo is only available on import. Therefore: I present it for you here.

1. Missing Link
2. Crystal Listen
3. Men Are from Mars, Women Are from Venus
4. All of One
5. Unreadable Communication
6. Turkey Crossing
7. Superblaster
8. Left of Mother
9. Sweetest Pie
10.Cuckoo

Disclaimer: I do not own the copyright to this album. I am posting this album here due to its unavailablity in the UK. If you own the rights to this album and do not want it posted here, please email me and I will remove it posthaste. If you like what you hear, support Curve buy buying their albums.