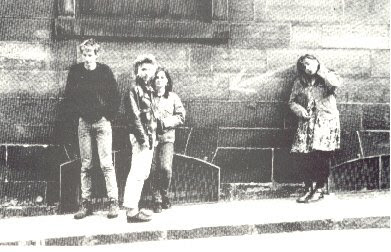 Back in February, I wrote that I was planning to do a new series on 17 Seconds where I would post stuff that was hard to get hold of. Well, it may not have been an organised (ha!) series, but as one of my readers has provided me with a lot of hard to find stuff that made the Peel Festive Fifties, I said I would post some of the non-Chrysalis Shop Assistants stuff. So here are eleven tracks.

First up, their very first single. Can someone PLEASE send the b-side if they have it and I promise to share it. STOP PRESS: see above!

Bubba and the Shop Assistants -‘Something To Do.’ mp3

This was a later cover of a very well-known Jesus and Mary Chain song, from when the band reformed:

Shop Assistants -‘You Trip Me Up.’ mp3

This was the seminal C86 cassette version of the track ‘It’s Up To You.’

And some other stuff that I have picked up from around the net:

I found this track on a compilation called Good Feeling, which I have never seen elsewhere. It lists David, Sarah and Laura, Alex presumably having gone off to do Motorcycle Boy

The Peel session version of All That Ever Mattered:

The demo version of ‘Safety Net’:

And this is a recording from a gig at what I think is now Moray House College of education in Edinburgh of ‘Safety Net’ and ‘All That Ever Mattered.’

There is a great Shop Assistants fan page here.

Oh, and according to the one-time Jesse Garon and the Desperadoes frontman, there WILL be a compilaton of non-Chrysalis stuff later this year. It presumably will include the final two 12″ singles of ‘Here It Comes’ and ‘Big E Power.’ I will post these soon, but hope you enjoy these for now.