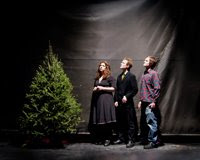 Call it slowcore, sadcore…or one of the most famous Mormon acts (well, alongside The Osmond family and uh, Wayne Hussey from the Mission, who was raised a Mormon), Low are something else. Supported heavily by Peel, I remember being utterly blown away by their 2001 album Things We Lost In The Fire, and when John Peel played ‘Sunflower’ I was genuinely moved. Though the first thing I ever bought was the Christmas LP and and the Dinosaur Act 7″. From Rough Trade in London, natch.

THese three tracks all made the 2002 Festive Fifty, and I think listening to these, it’s more than possible, given just how much I love the aforementioned Things… and 2005’s The Great Destroyer that I have forgotten how good this album is too.

Do buy as much Low stuff as you can, if you like what you hear here.