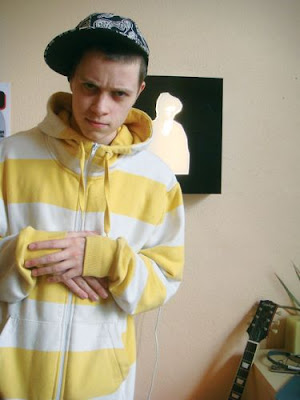 An article in the latest issue of The Wire bought me to the attention of the young man above. East London Grime artist? South London Dubstep producer? No Rustie hails from Glasgow, and the music that he makes, which wears its electro and hip-hop influences on the sleeve proudly should be heard. This genre? Russell Whyte, as he’s known to his Mum, calls it aquacrunkstep. The Wire point out that this is an ‘amusing yet oddly accurate term for the undulating synths and riplling percussion that leaves trails of echo as they swim around the speakers in chasing patterns.’ Actually, maybe it owes a small, wee debt to Aphex Twin’s Windowlicker which mixed hip hop and electronic dance music to devastating effect nearly a decade ago, but this still should be heard on its own terms.

‘Mic Of The Year’ as posted on the Wire website is from his Cafe De Fresh EP (will have to try and get my grubby little mits on it).

For those of you who have enjoyed the grime and dubstep stuff and enjoy independent music made in scotland, check this out.

These two tracks come from the Beatnicks volumes one and two compilations and are instrumentals.