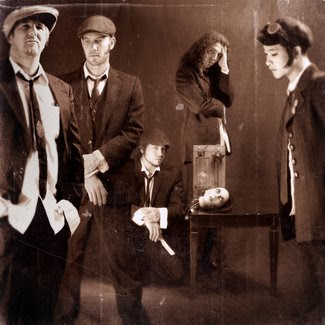 The five-piece above are America’s Woven. They are responsible for making some seriously weird and wondeful stuff that seems to be getting press and bloggers alike frothing with excitement. This is down to the heady mix of electronics and rock which has been getting excited comparisons to those who have gone before. They have been described as Massive Attack and Squarepusher writing pop songs, and similarities with shoegazing and trip-hop. More than one review has mentioned it in tones of awe and compared their forthcoming album with that alternative highlight, Radiohead’s Kid A.

Woven were previously signed with Interscope, but are now going it alone. In this day and age this seems to be the way forward for many artists who realise this is the way to get control over their music and how the public perceive it. Contrary to perhaps how the men with chequebooks perceive it, there was music before there was a music industry, and there will continue to be once the industry has eaten itself.

To compare forthcoming album Designer Codes with Kid A may seem a bold, even brash move, but there’s something in it. The band include Bjork, Aphex Twin, Pink Floyd, Jane’s Addiction and The Deftones amongst their influences and
have played with artists as diverse as Pretty Girls Make Graves, They Might Be Giants and Wu-Tang Clan’s Raekwon.

I’m not yet able to find out who this album is out through in the UK, but this is albumwell worth investigating. It is reportedly out ‘everywhere’ on August 26.

Woven -‘She Blows My Amplifier.’ mp3