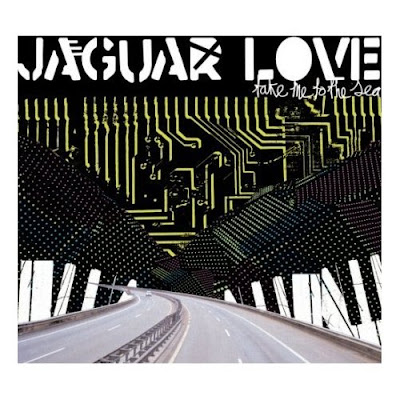 Jaguar Love -‘Take me To The Sea.’ (Matador)

Jaguar Love are the three piece formed from the ashes of two of Alternative music’s favourites early noughties favourites, Blood Brothers and Pretty Girls Make Graves. Whilst there are echoes of those bands, this is something new on its’ own, which should see them win plenty of new fans. This album has been played several times since Matador sent it to me, and like all the best albums, each time I play it, I hear something new.

Initially, it sounds like a very exciting noise, perhaps like the Mars Volta (themselves formed from the ashes of a much-loved earlier band) but easier to get into. But with every play, forty minutes worth of music becomes more thrilling, more exciting, more infectious and more necessary.

Songs like ‘Bats Over The Pacific Ocean’ and the first single ‘Highways Of Gold’ draw you in. It’s not dance music, but it makes you want to dance. And there’s an interesting hint of…bloody hell, it’s GLAM ROCK! Not the 80s Sunset/LA metal variety, but the 70s Real mcCoy, as pioneered by Marc Bolan, whose influence is all over this album.

Jaguar Love have been touring with Queens Of the Stone Age in America this year. But while they seem to have gone off the boil, to these ears at least, this trio from Portland, Oregon sound like an unstoppable force. Expect to see this clear up in those end of year polls.

Take Me To The Sea is relased by Matador on August 18.