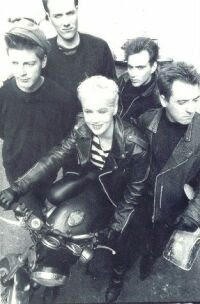 For the second post in a row, I am completely indebted to Tom over at Indie mp3 for providing me with the mp3s to make this post.

Motorcycle Boy came together of members of Meat Whiplash and Alex Taylor, lead singer of The Shop Assistants, a band I have banged on about repeatedly on here. The line-up of Motorcycle Boy was:

Alex Taylor (vocals), Michael Kerr (guitar), Eddy Connoly (bass) Paul McDermott (drums) and David ‘Scottie’ Scott (guitar). Their first single was released by Rough Trade, then they signed to Chrysalis. They recorded one John Peel session and that year their debut single ‘Big rock Candy Mountain’ reached no.22 in the annual Festive Fifty conducted by listeners to John Peel’s show. None of their singles charted in the UK, and were not released in the US. Their only album was shelved…but I remain convinced that Motorcycle Boy are one of the great scottish bands, and a proper re-issue programme should be set in place.

The singles were as follows:

(Note: the last two singles were due to be on the band’s album, Scarlet, which never appeared.)

After this, the band added ‘Fitzpatrick’ became One Note Jam, who issued a further 12″ single and then the band split. Alex became a real shop assistant, working for the Virgin Megastore in London.

BONUS: Taken from the cd86 compilation (well-worth your hard-earned cash, IMHO) , this is Meat Whiplash’s single ‘Don’t Slip Up.’

If you want more info on scottish bands, Jocknroll is THE place to start.

Finally, if anyone has the Shop Assistants or Motorcycle Boy Peel sessions, could they get in touch, please?