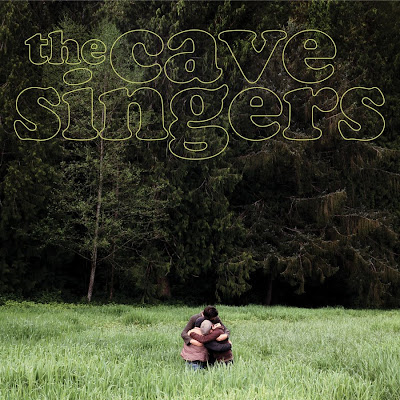 OK, so it was released last year in the US, came out here earlier this year in Britain, but of the 100+ albums I have heard this year* the Cave Singers’ debut is an astounding record that is in the top ten this year.

The band is Pete Quirk on vocals, guitar, melodica and harmonica; Derek Fudesco on guitar and bass pedals and Marty Lund on drums and guitar. In previous musical lives, Quirk was in Seattle post-punk group Hint Hint, Lund was in Cobra High, and Fudesco was the bass player for Pretty Girls Make Graves and legendary Murder City Devils. All these previous bands would suggest a sortof ‘alt-rock/punk’ sort of record, so why is that folk seems to be the thing here?

That’s not a bad thing, in fact it’s their approach to this music that makes this album such a refreshing and exciting record and one that I keep playing. Even as a blogger, I now get sent a fair amount of music and there’s a lot that perhaps only gets played once** but this album has been played frequently and belongs permanently on my iPod. The reference points here might be American roots music, be it proper country or blues, and the folk that comes from that part of the world. At times the music is almost hypnotic and mantra-like, at other times the sort of ininhibited dance music that, like the early work of Michelle Shocked is roots music that makes you want to dance.

From the opener ‘Seeds Of Night’ and including single ‘Dancing On Our Graves’, right up to album closer ‘Called’ this album continues to surprise and delight. Once heard, I bet it will haunt your brain forever.

Even if you think you don’t listen to ‘this sort of music’ I have to issue this challenge: if you’ve glossed over certain types of music I’ve written about on here, give this a listen. You will be surprised, pleasantly taken aback, and hopefully you might even go and buy it. With this, Jaguar Love and Shearwater, Matador Records are setting the standard for 2008.

Invitation Songs is out now on Matador

* I get sent a lot of these. Do you honestly think I could afford to buy that many new albums in one year?!