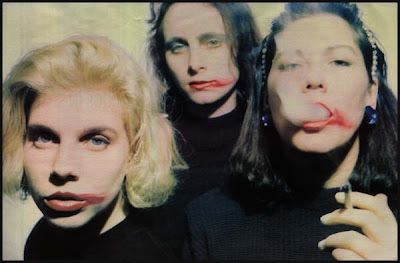 This is actually my 600th post, and I thought I would post this, the one and only Peel session by The Breeders.

The Breeders have been described as one of the most promising and frustrating bands to emerge in the last twenty years. They have prodcued some excellent stuff, but for what started as a ‘Supergroup’ (in the seventies sense of the word, where a band was formed out of a lot of people who were already in bands as a side project, see Crosby Stiils Nash & Young etc..) they soon started to become the main concern. However, in the time they have been around, they have produced four LPs.

When Kim Deal, then the bassist in the Pixies, got together with Tanya Donnelly, then in Throwing Muses, both must have been feeling that they were playing second fiddle in their own bands and that they also had a lot to offer the world.They did. The first album, Pod, was made in Edinburgh at Palladium Studios, and engineered by Steve Albini. This may be heresy in the blogger world (but I’ve already faced excommunication by some for not putting the Arcade Fire as my favourite band of all time, so what the hell), but Pod is actually my favourite of the four albums. This is the time that produced the only session they would record for John Peel, though the only song that made the Festive fifty, perhaps predictably, was ‘Cannonball.’

They recorded one Peel session for John Peel, in January 1990, which was broadcast the following month. All four tracks were written by Kim Deal

Breeders -‘When I Was A Painter (Peel session).’ mp3

This lineup would change over time, Tanya Donnelly would leave both Throwing Muses and The Breeders, first two produce two albums as frontwoman of Belly, and then go solo; Kim Deal was joined by her sister Kelley later on, though they had other projects as well, including The Amps, The Kelley Deal 6000…a whole heap of other stories.